In the far Chillward regions of Kaltirey, the Necrons continued their implacable march Scorchward. They had passed now outside the vicinity of any Guard outposts and moved now through the deep snow fields, blasted by blizzards but moving ever onward nonetheless.
But ahead of them, silhouetted figures moved in the snowstorm. The Necrons slowed, narrowing their visual detection units. Suddenly explosive shells streamed out of the white mist, hammering into their lines and the Deinosus Space Marines ran forward, Triceranoughts bellowing in fury as their cortex units flooded their systems with rage inducing hormones.
The Necrons showed no fear or surprise. They had defeated this opponent before after a series of tactical validations. They calculated only a 17% chance of significant loss now. 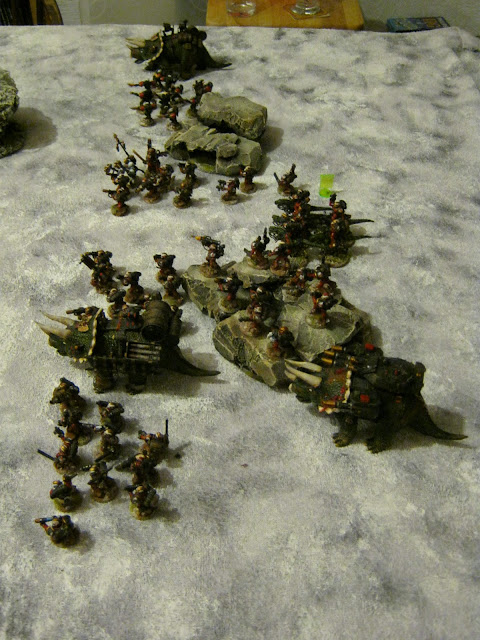 The Bladelords and Hunters ran forward, opening fire with bolters, plasmaguns and meltaguns, bringing down the lead Necrons, but scuttling fast round their flank came a gigantic insectile Tomb Stalker. It didn’t slow as it parted the ranks of the Bladelors, ignoring their bolt and plasma shots, ripping them apart one by one.
The Necron ranks opened for a moment and floating forward came the sinister form of the Necron C’tan: the Deceiver. The marines ran forward led by Felix Wulf and engaged him but they lacked the strength to harm him at all! Methodically, the Deceiver started to crush them, one after another. Realising the situation was untenable, Felix Wulf ordered his squad sergeant to activate his homing beacon.
The air started to crackle and spark, the godlike Deceiver pausing momentarily as it crushed the larynx on one of the marines. Then the sergeant transmatted up to the orbiting Black Scabbard and the Mammoth landed hard in its place. The great hairy beat trumpeted and crashed into the C’tan, knocking him back and Felix grinned. “Take that you bastard!”
But even the mammoth barely had sufficient strength to wound the Deceiver while every return blow tore chunks out of its flesh. It wasn’t going to work!
And meanwhile, the Necron warriors continued to march implacably forward.
﻿
﻿A team of Raptor Riders pulled ahead of the Space Marine line, engaging a unit of Immortals. Their powerful weapons and the strength of the raptors’ jaws proved to be a dangerous combination, but any victory was insufficient. Both Triceranoughts were crippled now; the aggressive strength of the Deinosus battle group was diminishing to the critical level. 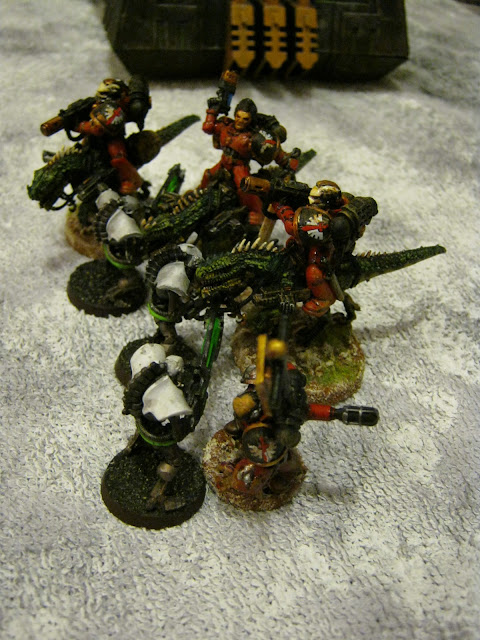 There was nothing now for it but to call a withdrawal.
Captain Woolf put the withdrawal code out across the com and slipped out of the reach of the deceiver’s swinging fists as it ripped the Mammoth into its constituent parts.
The battle was over; and once again the Space Marines of the Deinosus battle Company had failed to halt the Necron advance.
Posted by Jack Finn at 16:30