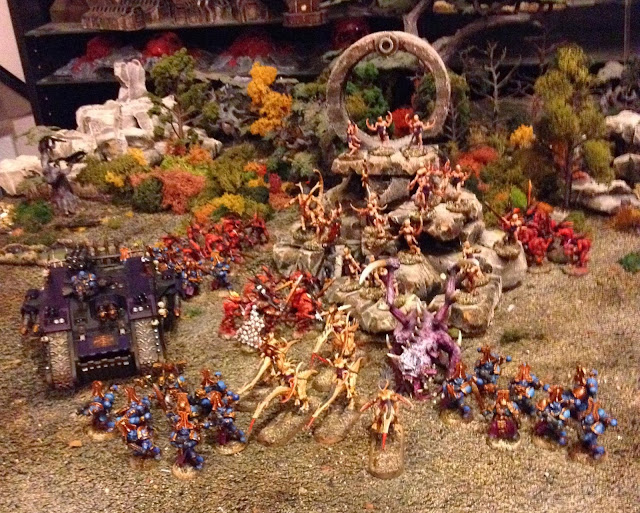 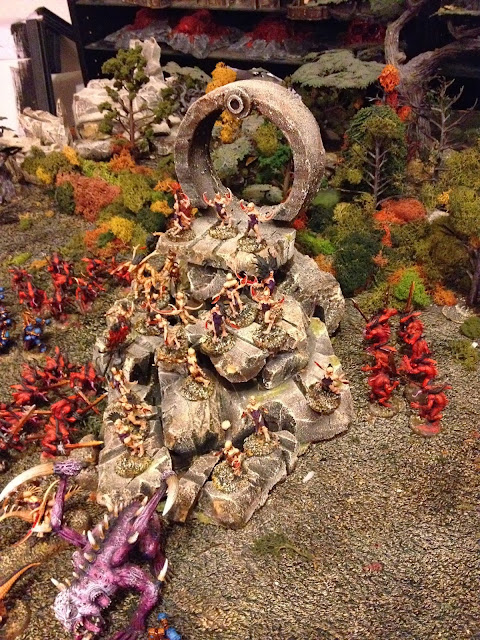 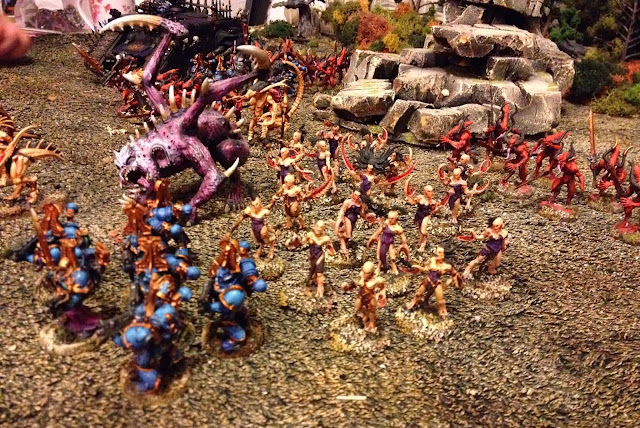 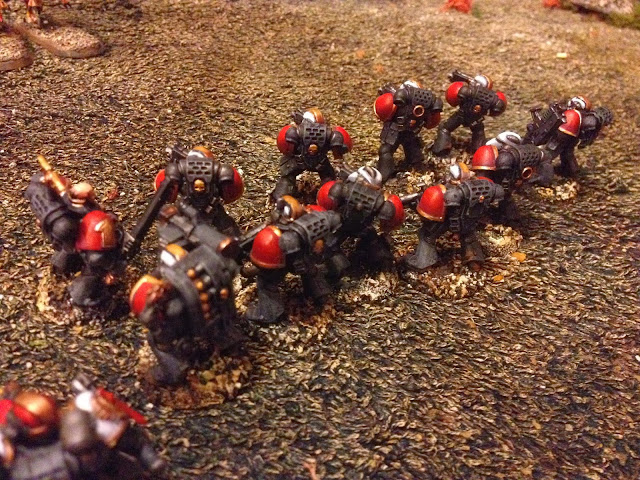 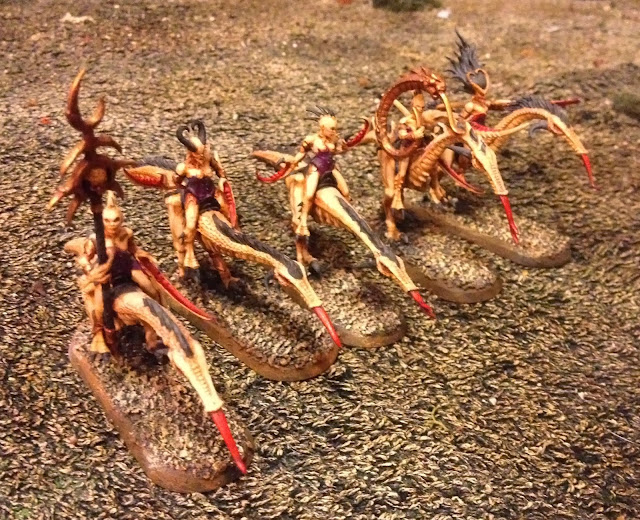 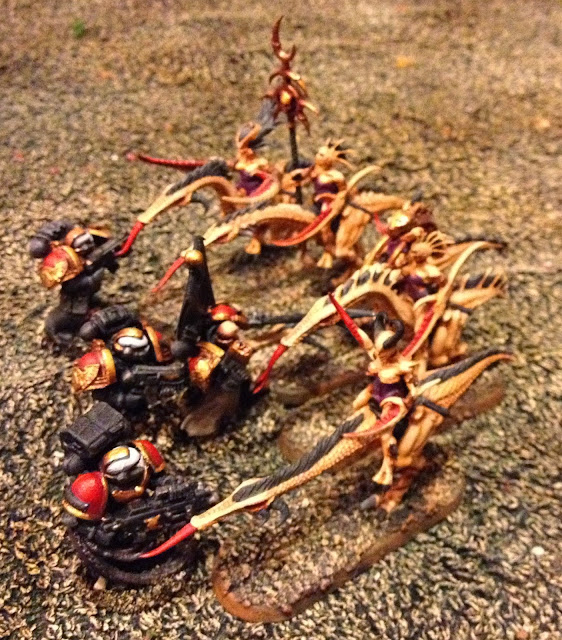 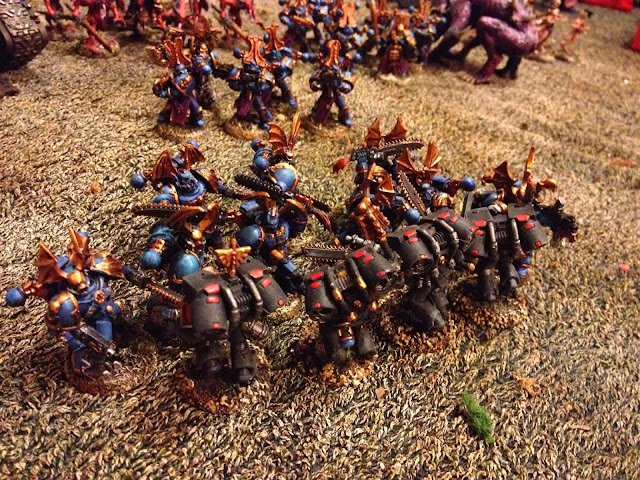 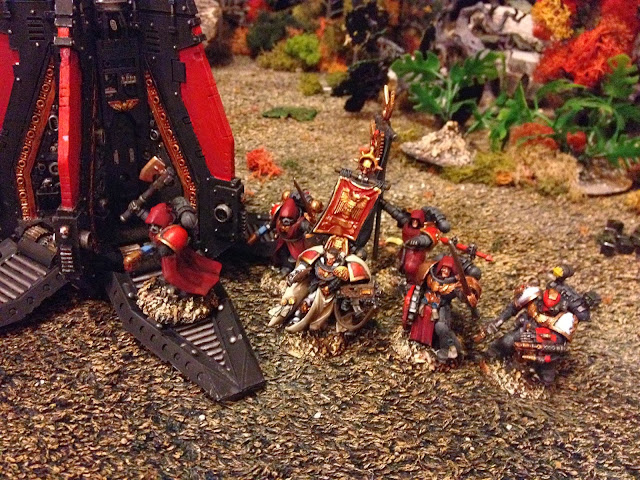 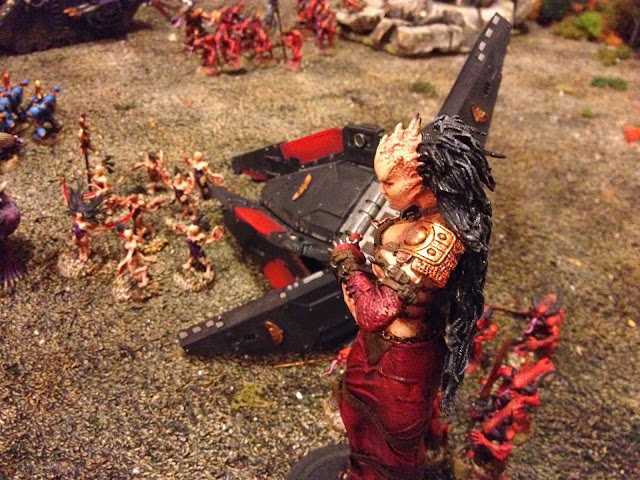 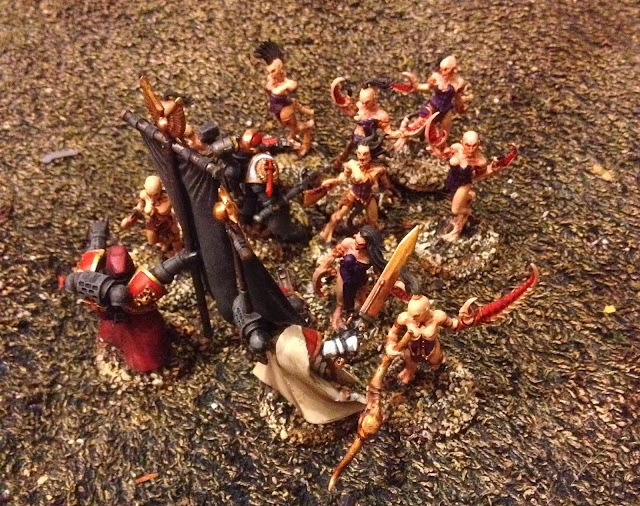 ﻿The Crimson Blades fell back to the Pernicious Gate, forming a defensive gunline. 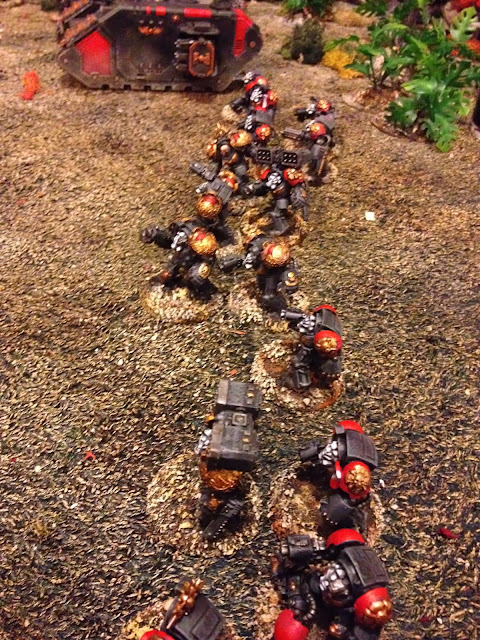 It was absolutely critical that the gate be held. If it fell then the dark host of the Chaos Space marines would gain another swell of power, this one taking them even closer to true indomitability.

A complete Termination Platoon beamed into position, the Sternguard Veterans taking station on the steps of the mighty gate. 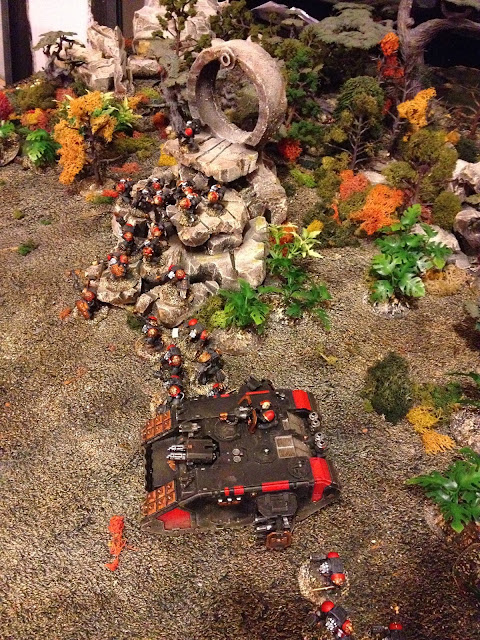 Then suddenly the forces of Chaos were upon them: deathly silent Rubricae letting fly with arcane bolt rounds; slavering gore-red Bloodletters sprinting across the packed earth; huge clanking Chaos Terminators, raking the line with autocannon shells... and a mighty Daemon Prince on leathery wings that plunged into the ranks of the Crimson Blades, slashing back and forth with its mighty blade.

The Sternguard fell immediately to fire and sword. The Bladelords swung round in their Land Raider and leapt from its assault ramp, charging into the fray. 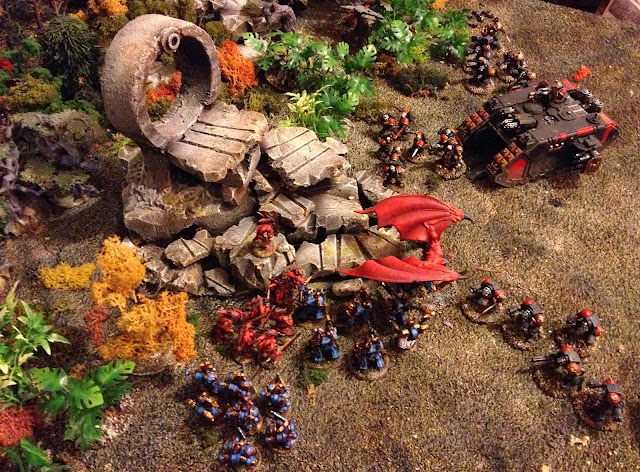 But the Daemon Prince was unstoppable. It carved them in twain, one by one, laughing maniacally. 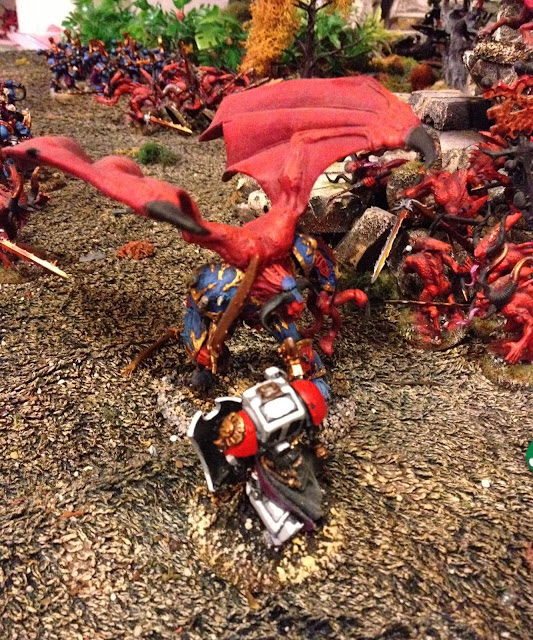 All they could do was fight on and hope to lower the attacking numbers sufficiently to drive them off.

But fully twenty hardened veterans were spent before the Daemon Prince fell and the loss had a crippling effect on the rest of the line. 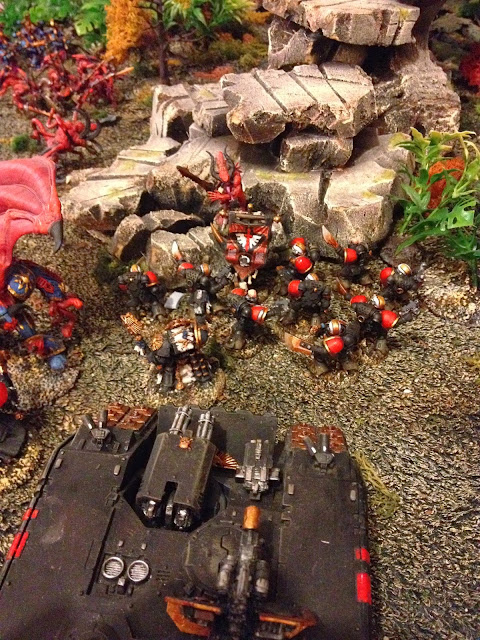 More reinforcements of Chaos funnelled into the clearing: a Land Raider churning mud, letting off Lascannon blasts, and the mighty scythed arms of a Daemonic monster. each fall of the scythes impaled another Terminator. The defenders were running out of time and men. 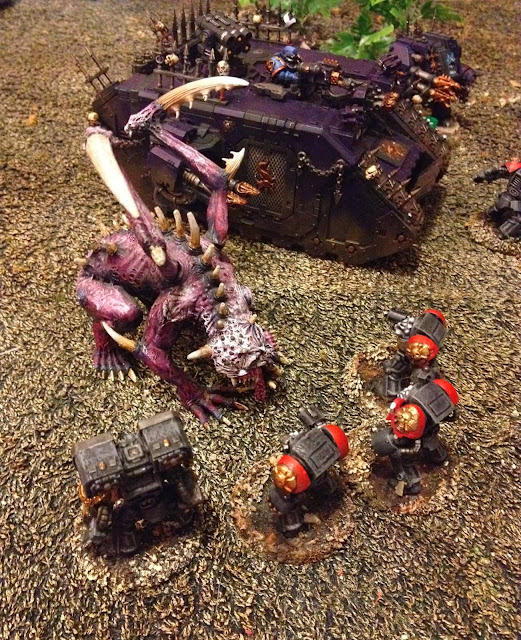 Then the Chaos Land Raider fell open and out poured Night Lords, their winged helms disguising leering features as they charged into close quarter combat, taking losses but bringing down more Space Marines than could be spared. 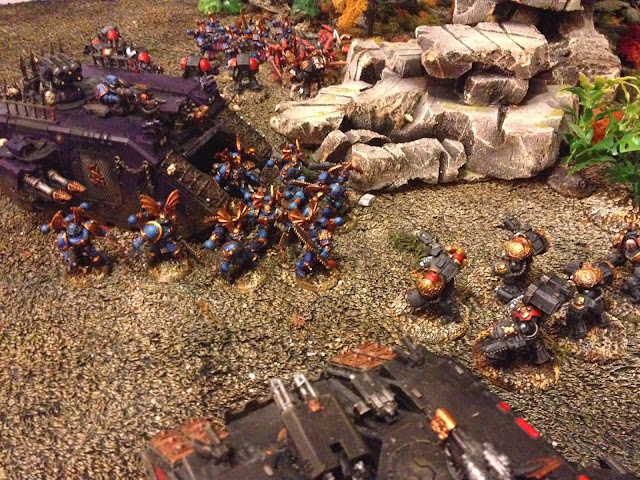 The gate was being swamped but the Bladelords fought on, Chaplain Sank leading them into the Bloodletters, desperately fighting to hold back Chaos. 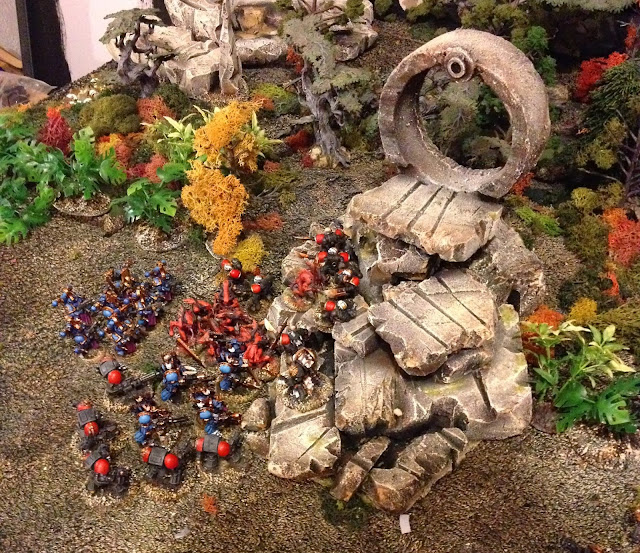 They managed to eliminate the Daemons but the Night Lords had dispatched their enemies and now charged up onto the gate steps to throw open the portal.

Only two loyalist marines remained: Chaplain Sank and the last Bladelord. Their bodies shook with their exertions then they became suddenly calm, stilling their thoughts, and leapt to battle once more. 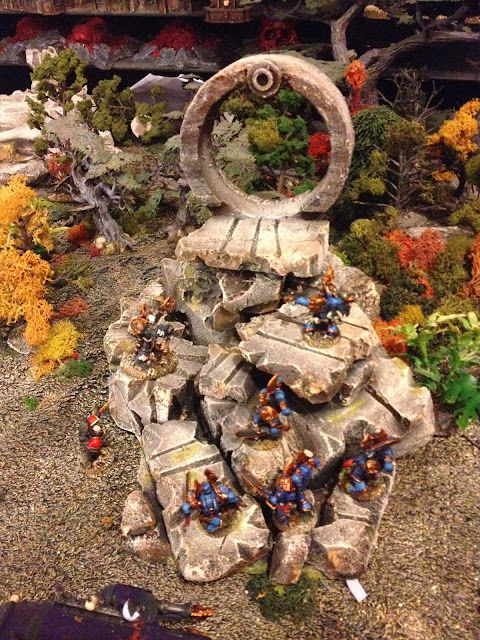 The Bladelord fell but Chaplain Sank smashed his Crozius Arcanum back and forth, pulverising bone and flesh inside the corrupt power armour. The huge Daemonic monstrosity reached his Land Raider, its scythes tearing its ceramite to shreds.

Chaplain Sank withdrew up to the gate. 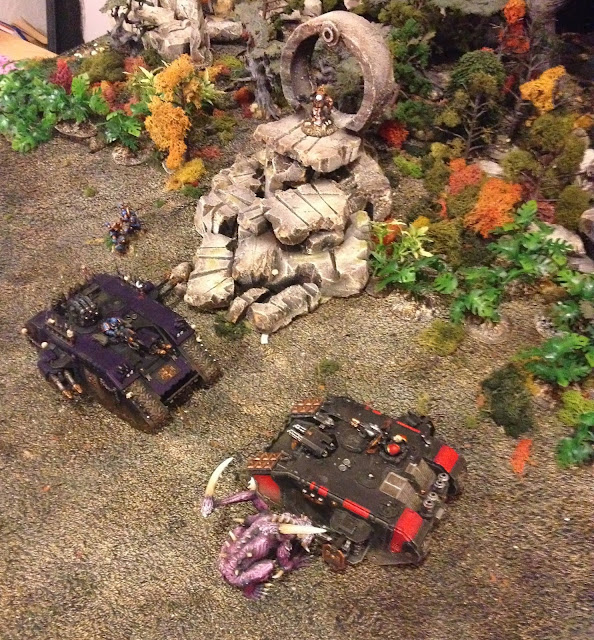 He was the only one left now and he had a choice: open the gate himself if he could; take control of the Daemonic legion - damning his soul - or withdraw and muster what little forces they still had nearby for a counterstrike - one last attack to knock the head from the shoulders of this invading force at least.

The choice had to be made now. 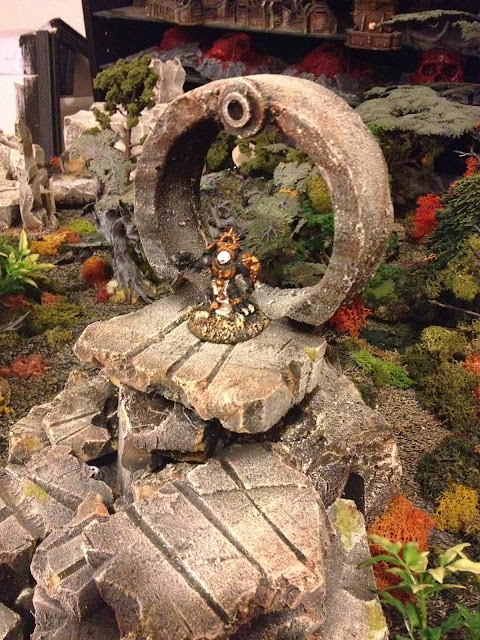