Spotlight On... Before the Push

The manager of my local Games Workshop store told me they were running a unit painting competition. I was never one for competitions really but I thought, what the heck! I had just bought the new Tyranid Trygon and thought I'd do that for the competition. But bad luck, the entry had to be a unit of infantry!

Deciding to do something special - the best I possibly could do - I ordered a unit of Forge World Death Korps of Krieg models standing at ease and Before the Push was born! 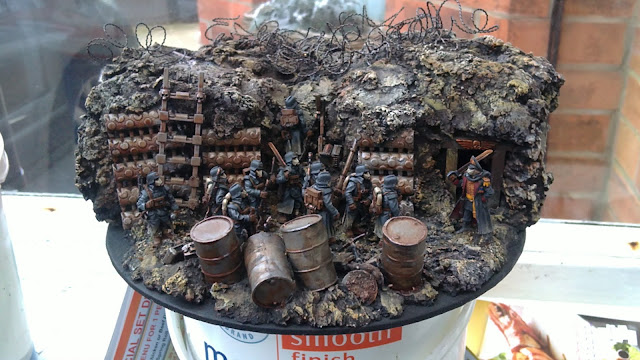 The idea here (hopefully obviously) is that the infantrymen are getting a last minute pep talk from their commissar before climbing out of their trench going over the top. 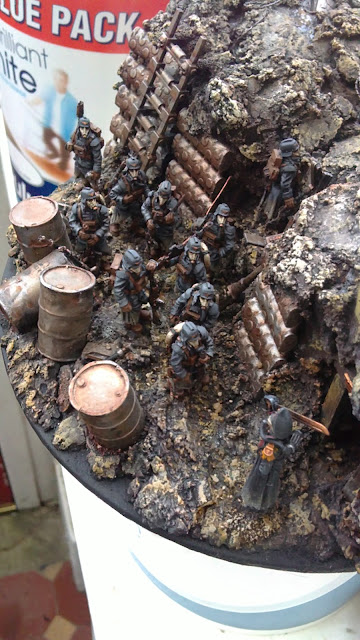 I had to wait for the better part of a year before they ran another infantry competition and handed it in to win first prize! 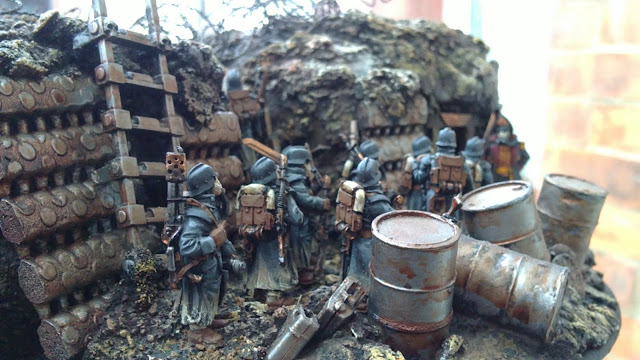 Ah the glory! Would that there had been more than one entry in my category!

The diorama has been on display in the local GW since April and now, finally, I’ve got it home to where it belongs.

The bulk of the diorama is made out of insulation foam covered in multi-purpose filler. I used GW razorwire, a GW ladder and barrels & petrol cans from a military model shop. The metal braces holding back the trench wall are actually fabric that I got from The Range. 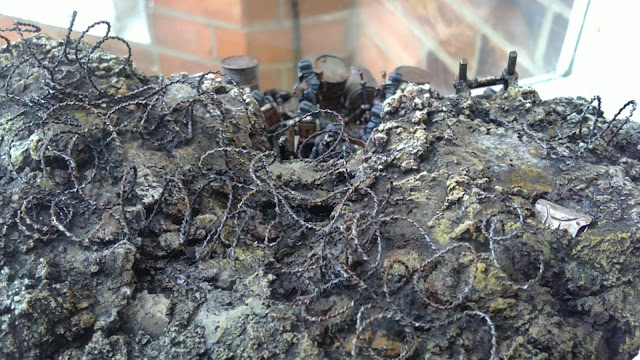 The Approach of War 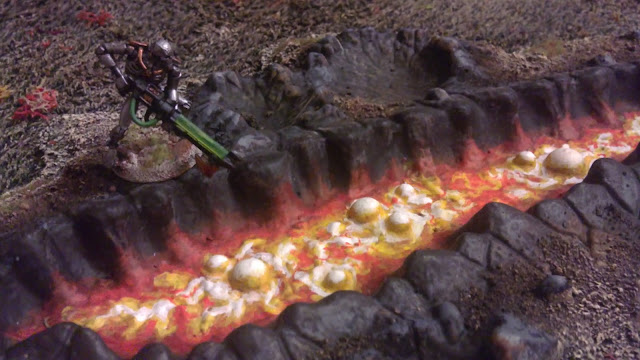 After a lengthy illness and shambling recovery, I can now happily post part 2 of the Ongoing Conflict.

This continues the story on as the beleagured defenders of Valorax struggle on against overwhemling asalt from both daemons of the Pernicious Gate and relentless silver warriors from the depths of the Chill.
Posted by Jack Finn at 19:36 No comments:

Tales of the Valorax Guard

Check out the Forces of Valorax page now to find a detailed history of the Valorax Guard, the Imperial Guard element of the loyalist forces. 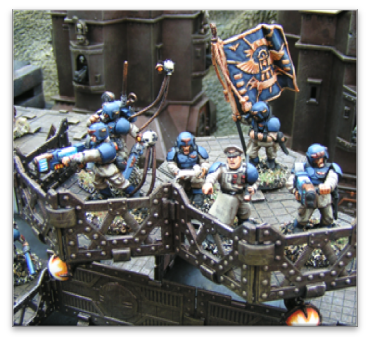 There are several entirely different armies based in each of the planetary regions making up quite a nicely diverse force.
Posted by Jack Finn at 10:30 No comments:


The sorcerer, Erasmus Bachmann, looked down from the observation window of his dropship at the dense jungle canopy of Lapitar and gave the nod to the Chaos renegades checking their equipment behind him. They were almost in position. 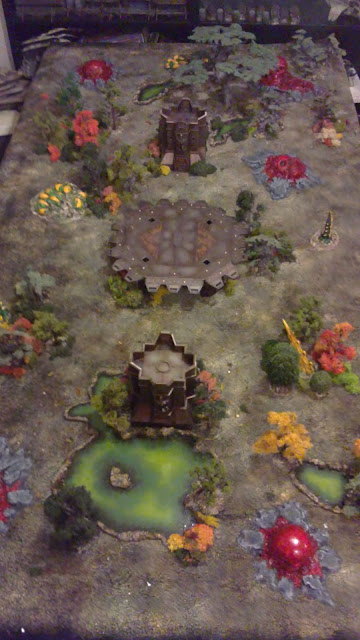 Erasmus and his Dark Elite had been given the mission target of securing the second Pernitious Gate, the second portal into the chaos realm that would allow the Chaos Space Marines of the Good People and the dark master to take control of another vast force of daemonic minions. The only thing stopping them reaching the gate was determining its exact location and whatever secrets the jungle might be hiding.
The opening of the first gate had weakened all of the others. Raw chaos was leeching through and infecting the planet in localised areas. This made things… easier. The touch of the warp had open great fissures in the ground and from these spewed torrents of blood. From the blood rose gigantic skulls, gaping with sightless eyes into the sky. The taint was like a signpost, showing if not the exact coordinates, then at least the general location.
The Dark Elite made landing close to an abandoned Guard staging post made up of a pair of bastions and a landing pad and fanned out into the jungle, searching for indications of the gate’s locale. The bubbling blood pools were everywhere, the taint visibly spreading. But there was another indication of infestation that caused Erasmus Bachmann to pause, wondering if they might have come unprepared. Tyranid spore chimneys stretched up everywhere. They had landed deep in the Lapitar Infestation Zone!
He called for his men to close in toward the complex but it was already too late. From all sides, they came, racing from the bushes and pouncing without warning on the renegades. Every part of the Dark Elite force came under immediate attack. There was no withdrawal; only frantic fighting. Bachmann’s terminators hacked down the horde of Hormagaunts that leapt at them but a few hundred yards away a gigantic Trygon tore their Predator apart and maries were being caught and torn to pieces in every direction.
A Carnifex charged from the undergrowth and two rhinos and a squad of marines carefully opened fire, trying to maximise the damage before it could engage them. It looked at first like they might bring it down but it wasn’t enough. The Carnifex pounded into their line and crushed them all. All across the search zone, marines were being cut down, trying to regroup and being hunted until they were eliminated.
But at one point in the battlefield the Tyranids were balked. Erasmus Bachmann and his terminators crushed the last of the Hormagaunts in their power fists. Erasmus checked his auspex. The source of the warpleak was appearing on the screen now he was on the ground. He was close. They just had to get to it.
Before he could move the trees were smashed apart and a towering Hive tyrant came through. It roared and pounded toward them. Erasmus frowned, conjuring a warding. If he could get to the gate and open it, they would have a vast daemonic force intantly fighting for them but the monstrous creature was blocking his way. They had to take it down.
Erasmus and the Terminators met the Hive Tyrant head on but in its first thundering blow it killed one of them. They were the elite of the Elite but it was a perfectly designed apex predator and Erasmus realised straight away that there was little hope. All he could do was strike a blow then focus his will through his force weapon and hope to slay it. They fought on, no blows landing on the indomitable thing and the terminators being knocked down one by one. Soon only Erasmus remained but still he didn’t surrender. At the same tiem he simply could not land the killing blow and it was slowly grinding him down. 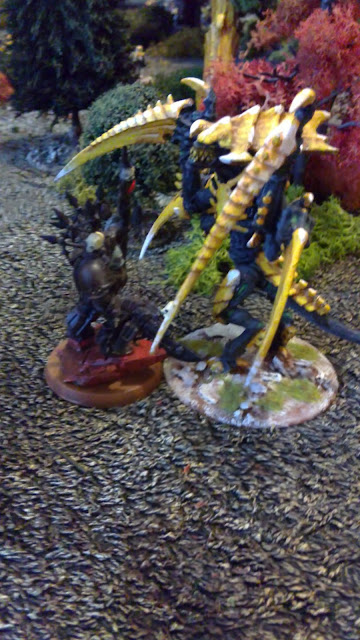 He still didn’t have the gate’s exact location but he knew it well enough. There was no time to reach it, which was incredibly frustrating, but his survival now was paramount. Blocking one last slashing blow from the Tyrant he activated his homing beacon and teleported back to the dropship.
Not a single member of the Dark Elite landing party remained alive.
Posted by Jack Finn at 16:05 No comments:

The Start of the Ongoing Conflict

Part One of the Ongoing Conflict has now been posted on the page above.

This is only the beginning. Many battles have already been chronicled. These will be added over the coming days. 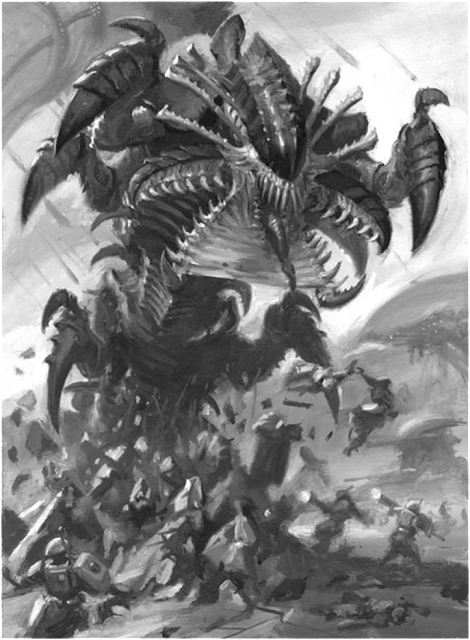 The Coming of Chaos!

The background to the malicious force of Chaos Space Marines known as the Good People has been added to the Enemies of Valorax page. You'll find a full history of the force, all about their base of operations and supply lines, and a few notable characters. 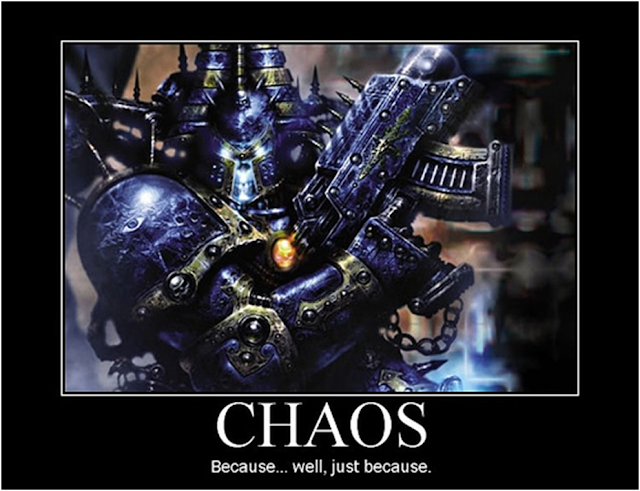