On the Painting Table: Thunderfire Mechanicus

There are only two days left now before my first game using my brand new Adeptus Mechanicus army and I’ve been working feverishly to get together a 1,500 point army (using some Imperial Guard models to plug the initial gaps).
I’ll be revealing more in the near future but here’s a glimpse of my Reductor Thunderfire Battery. 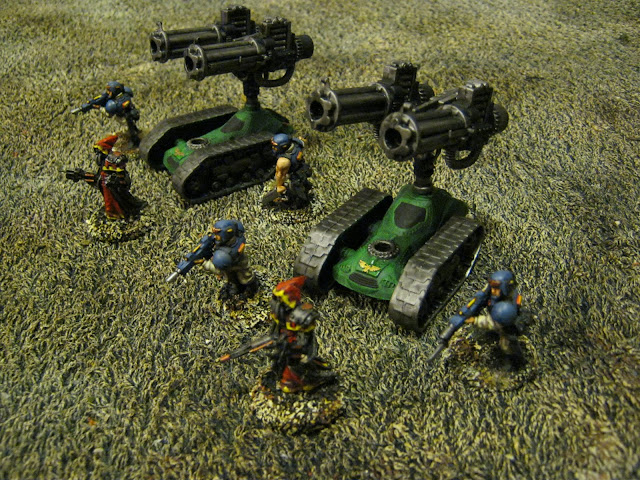 Basically it’s an artillery battery using rules from the Tempus Fugitives Cult Mechanicus Codex. Tempus Fugitives are a group who organise themed tournaments at Warhammer World. I used to go to these. But have now stopped.
Anyway, the Thunderfire Battery functions similarly to the Space Marine one but here we see two “Balistarai” (Imperial Guard Cadians - using my Chalice Trident models) and a Tech Priest manning each one instead of a Tech Marine.
The models are partially made vehicles from Robogear. I bought a whole boxed set when they were going cheap and I have loads left to make. They form the basis of my whacky Mechanicus forces.
Those are Forge World brass eagles by the way, in case you weren’t wondering.
In the game I’m expecting these to be a glass fist: very destructive but also quite fragile.
Posted by Jack Finn at 21:51