Tim (Tyranids) vs Peter (Chaos Space Marines)
Deep in the heart of Lapitar, the jungle canopy lay still.
Then came the roar of jet engines as the dropship fell from the dense cloud cover and swept low and the branches and foliage rattled under the pressure.
Erasmus Bachmann and his Dark Elite had returned.
Their previous visit to the dark bowers of Lapitar had been fruitless in every way but one: the location of the Pernicious Gate was still not known exactly but its general location had been verified. And now they knew what they faced. This time there would be no surprise attack. 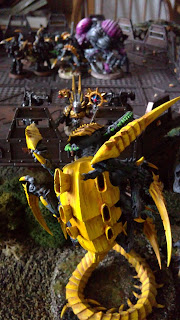 The area was relatively clear of Tyranids when they made landing. The heavy bolters on the landing craft picked what stragglers there were off then withdrew as the landing party fanned out to take position off the bastions and landing pad available. This time their strategy was different: lure the Tyranids in to a defensible position then eradicate them, cutting their numbers down sufficiently to allow them to search the jungle freely.
The Dark Elite found their positions and readied their weapons. And then the Tyranids came, surging out of the foliage, scything talons flashing and jaws bared.
The Dark Elite levelled their bolters and opened fire, eviscerating the first wave. They reloaded calmly as the second wave approached then eviscerated them as well. They reloaded a third time. Now the third wave was closer. Armoured fingers worked quickly; efficiently; but no longer perfectly calmly.
Then the Tyranids were on them. Genestealers swept up onto the landing platform and ripped into the power armour of their enemies, peeling it open. The Broodlord at the fore froze one of the marines under his powerful gaze then gutted him and half a dozen of his brethren. 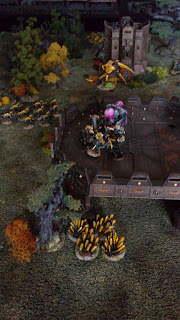 The Chaos Defiler fired blast after blast from its battle cannon, ripping termagants and hormagaunts apart but then from the ground rose the gargantuan form of a Trygon Prime, towering even over the trees. Giving out a roar, the Defiler scuttled forward, charging into it but the vast claws of the beats tore it into blood-soaked pieces before it even had the chance to strike back.
Erasmus Bachmann summoned his vast psychic powers to scan outwards while his Terminators readied themselves to take the assault of a cluster of Genestealers and a Hive Tyrant, searching for the Pernicious Gate’s exact location. The Hive Tyrant charged closer, its hoofed feet pounding the soft earth but Bachmann couldn’t respond or prepare himself. He had to focus only on his objective.
The Tyrant was closer. It was almost upon him. But he still couldn’t find the gate!
The Hive Tyrant and genstealers struck simultaneously. The Terminators stepped in to meet them but against the combined assault they had no hope. Still Erasmus searched for the Gate but to no avail. There could be no failure this time. Failure meant death. He strained his senses into the ether, probing as his Terminators were cut down one by one.
Then the last of the terminators fell and the Tyrant was on Bachmann himself but a split second before its talons could impale him to the ground he caught the gate’s exact location and hit the activation rune of his personal teleporter.
The Hive Tyrant roared in anger, cheated of its prey as the rest of the swarm tore into the remains of the landing party. The remaining troops stood little to no chance but that didn’t matter anymore.
Erasmus Bachmann had the exact location of the Pernicious gate. Soon it would be his!
Posted by Jack Finn at 20:03