Quite a few years ago I decided that I wanted to do something particularly different with my space marines. It took me some time to come up with the idea and a few years more to clean it up until it was presentable. Then a couple more years before it was a legal army. Take a look at the centrepiece model: 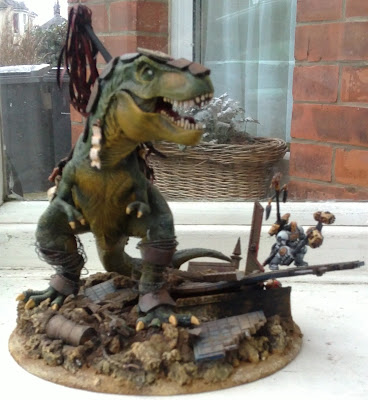 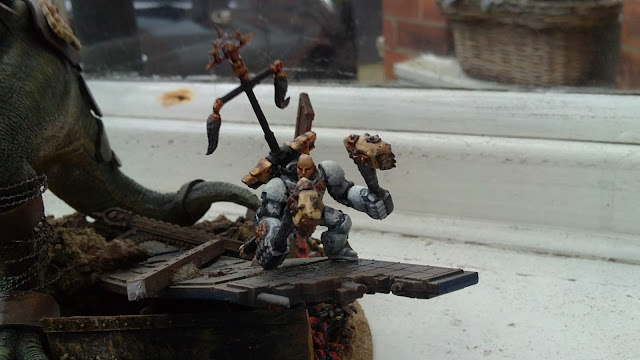 Here's Felix with he Quake Clubs. I used Ogre clubs on Terminator Power Fists. In the game they count as lightning claws if I take him off the base (he's on pins so he can fit on a normal base). I wanted the look of the diorama to be Felix running up this big plank thing while Rex looked round to see what was coming. 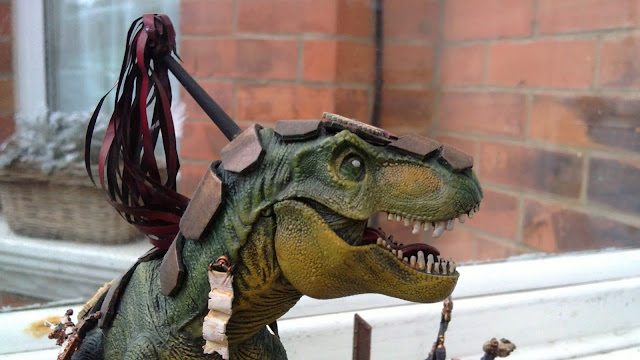 Rex was bought at a toy shop in Oxford. He cost over £18 but he was so much better than the bheap one I'd been using before I had to splurge out. That plume of his is made from a plastic flying stand and loads of tiny pointed strips of paper. The armour plates are made of thick cardboard bent into a curve. Believe it or not, he came with a fully posable mouth! 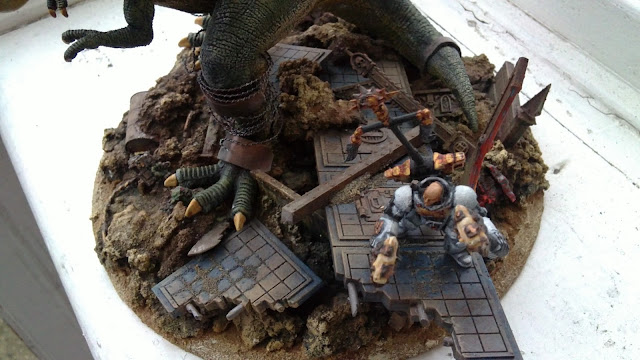 It was on this base that I pioneered the colour scheme that went on to be the colour of the bases in all my armies and on my war board: Overlapping patches of slack, scorched brown, bestial brown, bubonic brown and bleached bone. You'll notice there's razor wire round Rex's ankles. All the better to prevent those pesky assaults.

Click on the picture to make it bigger and take a close look at what's between his toes... 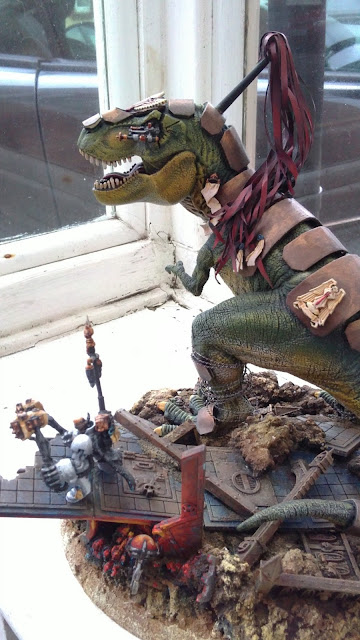 I used quite a few parts from different kits to add detail to these guys. ﻿I'm quite pleased with the cybernetic attachment on Rex's eye. That was the sensor from a Landspeeder.
Quick question for you: What's that red area near the bottom left there? It's meant to be a light but the number of people who haven't guessed that was a bit disappointing. Ah well, what can you do? 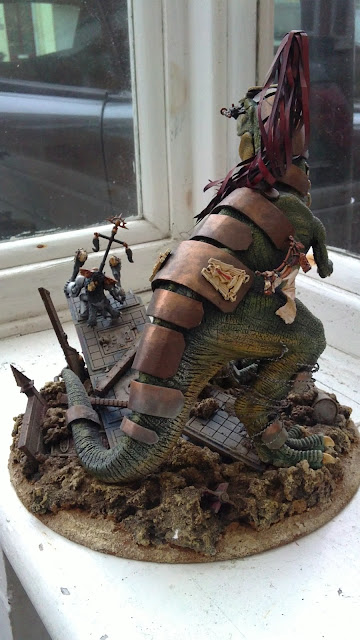 The only question remaining is how can this guy possibly fit into a Space Marine army...

Well, I used the rules for Chaos Space Marines for my feral Dinosus Battle Company. This guy counts as a Daemon Prince. Although to be honest the base is preposterously overszed and works against me tactically. And if I have Felix on foot using the rules for a Chaos Lord he's actually a better miniature to have and much harder to kill.

But hey! I didn't do it to be good in the game. Sometimes you have an idea and you just have to follow where it leads...
Posted by Jack Finn at 17:42