Claiming Back the Jungle - Part Two: A Tactical Misstep

As the Jungle Men of Lapitar struck at Station Xeta, another battalion simultaneously circled Airbase Kappa in their Vendetta gunships, looking down at the overwhelming Tyranid infestation. 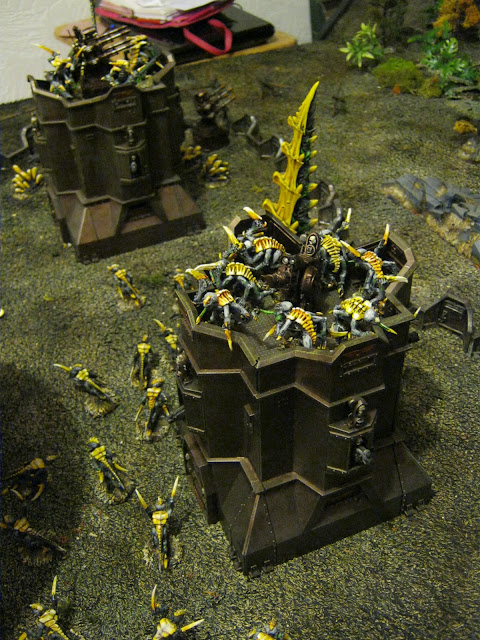 The base was heavily fortified, two bastions and multiple automated weapons within the confines of an Aegis Defence Line protecting twin launch pads. It was an important refuelling station and so its recapture would pay dividends, but more than that, it was the centre of a major hive network. Slaughtering the Tyranids here would take out a huge swath of their defensive frontier, opening the way for a major offensive. 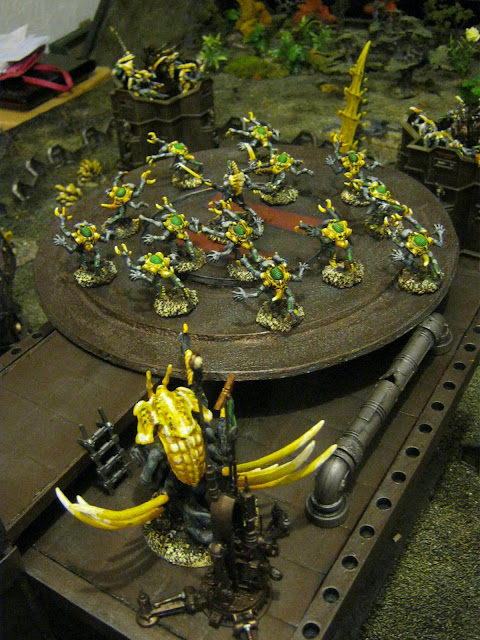 Captain Grebadger gave the nod and immediately the firestorm began, the entore base bombarded with incendiary bombs designed to wipe out the alien life while preserving the valuable defensive infrastructure. Gaunts and Genestealers were incinerated, screaming guttural screams in the gelatinous clinging flame. 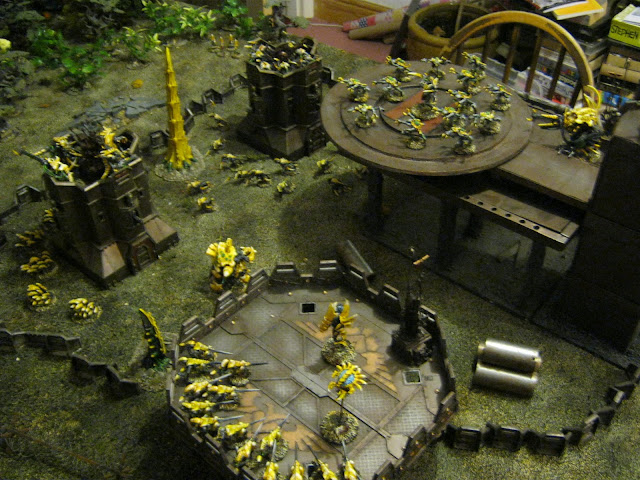 And then the Vendettas swept in, dropping off their troops and pinpointing the towering monsters with their racks of twin-linked lascannons. Veterans dropped onto the upper landing pad and eliminated even more Genestealers under fire from two hand flamers and a heavy flamer, lasguns driving the creatures back.

But it wasn't enough. The Broodlord the survivors back in and wiped them out before they could shoot further.

On the lower landing pad, more veterans landed, all but wiping out the Termagants stationed there but again, a charging Carnifex, clambering up onto the platform, ripped into them, slaughtering every man. 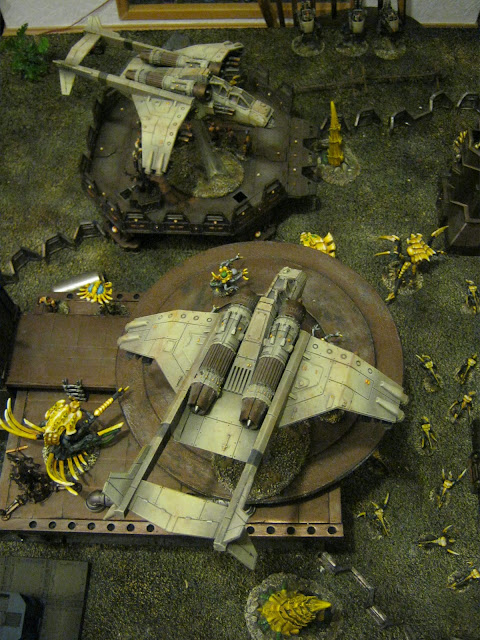 Sentinels strode out of the jungle, firing their Autocannons at the Hive Tyrant, but though wounded, they couldn't stop its assault. They were torn to the ground.

Paratrooping Storm Troopers, their landing coordinates confused by static from the presence in the warp, fell to ground far from the battle. Before they could redeploy a gargantuan Trygon burst from the ground, gouging holes through their torsos and wrenching them back beneath the earth with it. 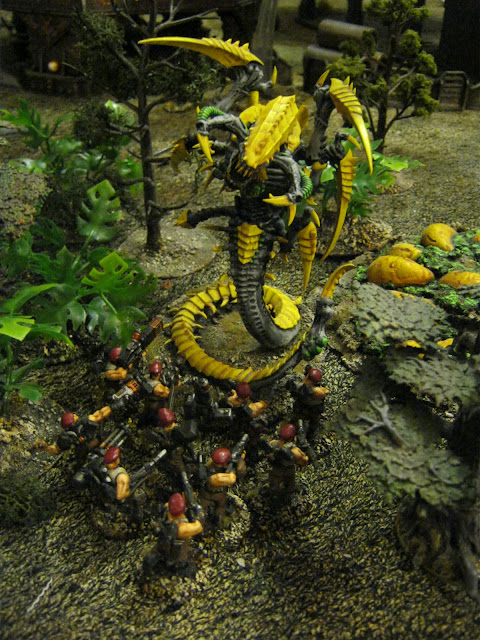 This wasn't going to plan. Captain Grebadger squinted through the cloud cover feeling panic dancing across his mind. This was the commit or withdraw moment, There was time to pull back and keep half of his men alive. Or he could go all the way and do everything they could to hold up their part of the attack.

He glanced at his sergeant. "Commit."

They grabbed their rappel lines and swung down onto the upper landing platform, eliminating the surviving Genestealers. They let fire at the Carnifex and Zoenthrope still controlling it as behind them two infantry platoons came down. 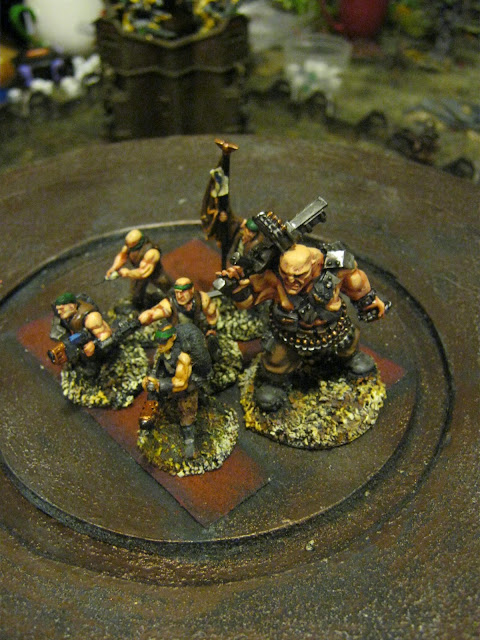 But disaster! One of the platoons suffered a grav shute mishap. The first man to leap from his Valkyrie got tangled in the release mechanism and swung into the engine. It exploded, swinging into the air until it struck the other two Valkyries in the deployment wing.

Below on the ground, the second platoon landed in the bushes and opened fire but Leaping Hormagaunts raced toward them and hacked them to death before they could have any effect on the battle.

Everything was going wrong! 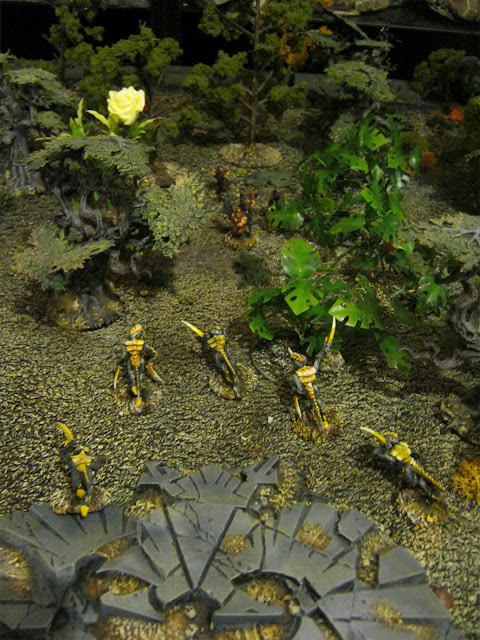 Captain Grebadger looked out across the battlefield and realised how badly he had failed. His men and vehicles were being destroyed piecemeal and they had captured nothing! The great victory this had meant to be was turning into a war-turning disaster!

He turned back to his own conflict at hand and realised that once again he had let his concentration slip. His squad was already dead! Only he and his Ogryn bodyguard remained and the monstrous Tyranid creatures were surrounding them.

And finally... he was doomed. 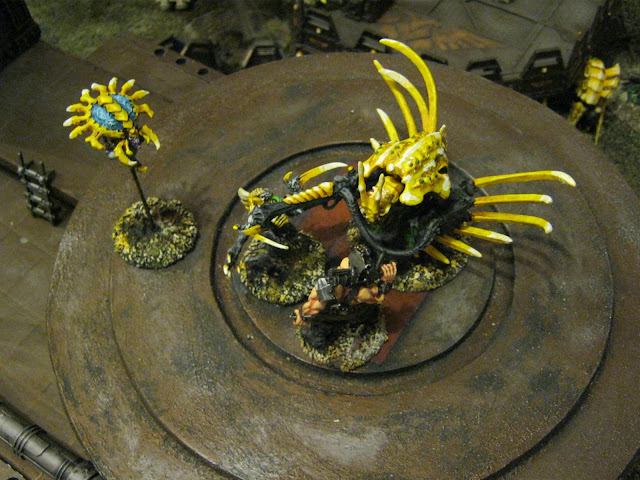 After owning Planetstrike and its terrain for several years it was a bit lax of me to not actually play any games with it.

But that had to change someday; and my first Planetstrike game deserved some extra special effort on the scenery... 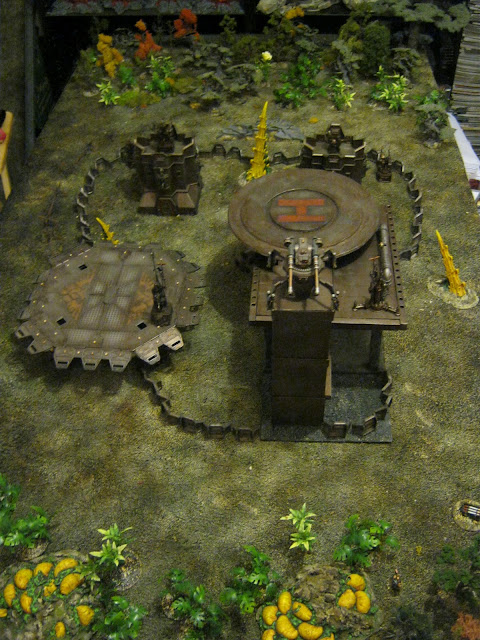 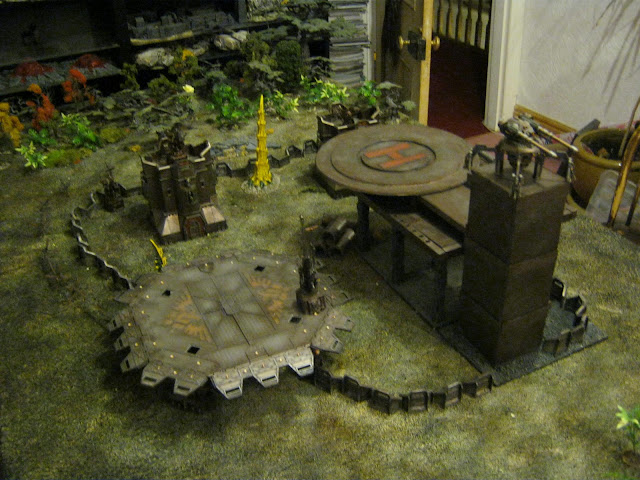 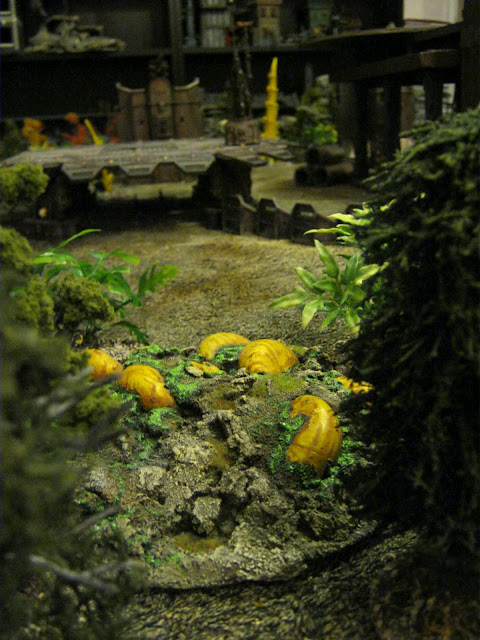 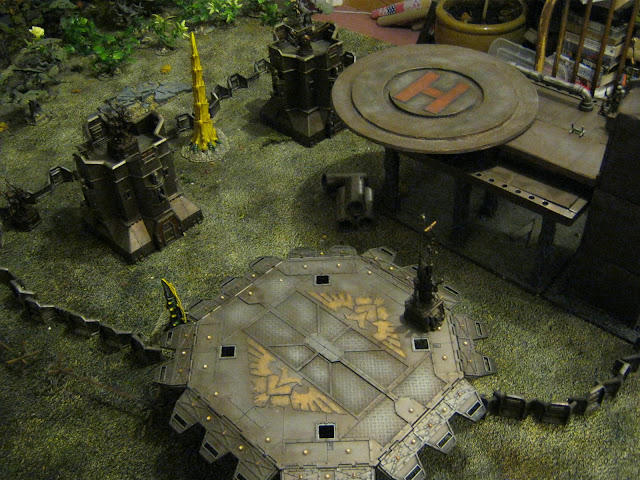 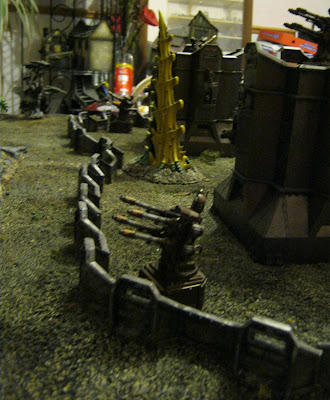 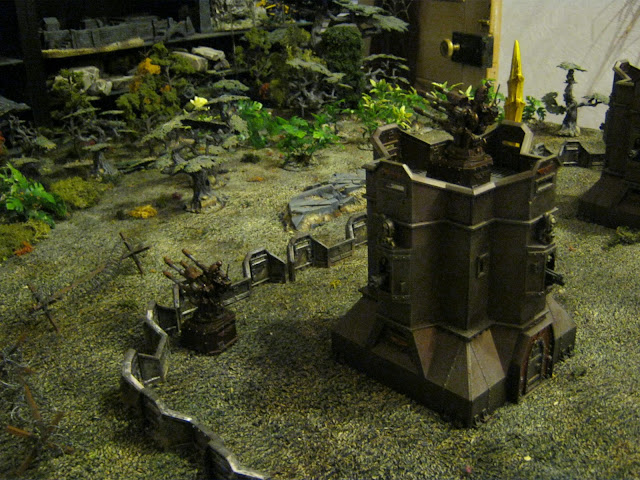 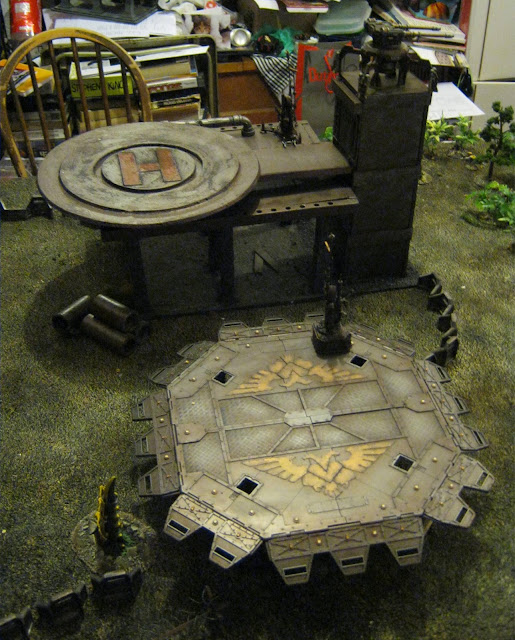 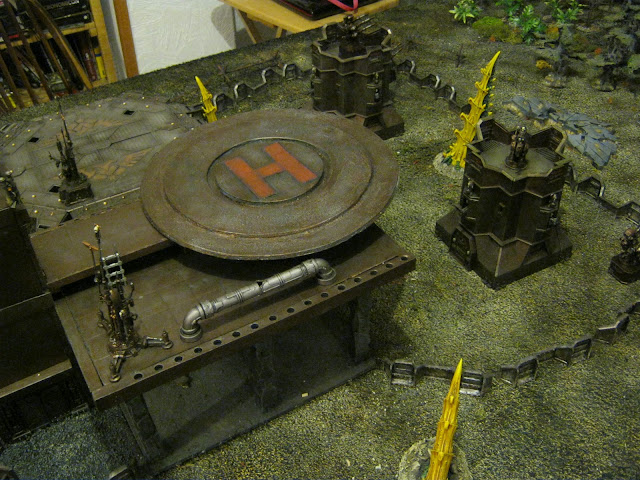 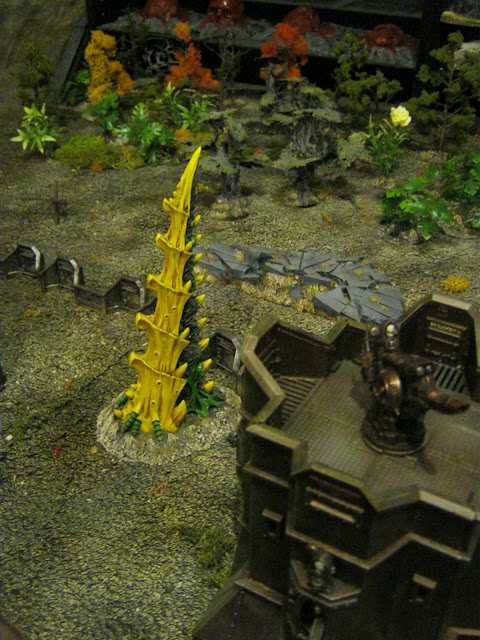 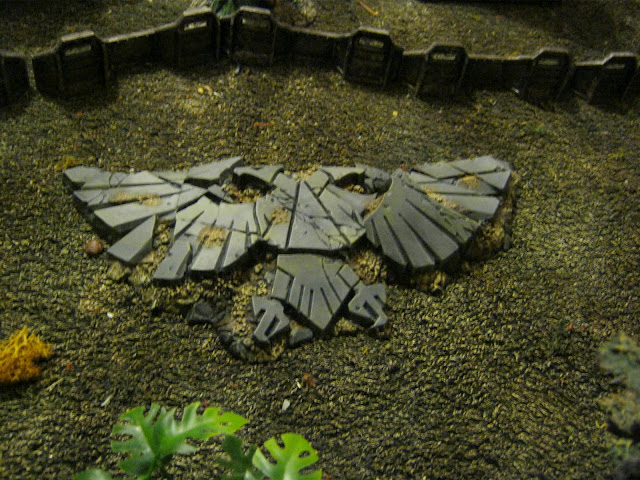 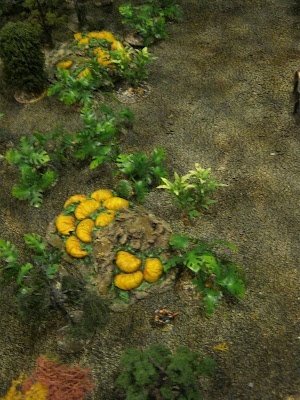 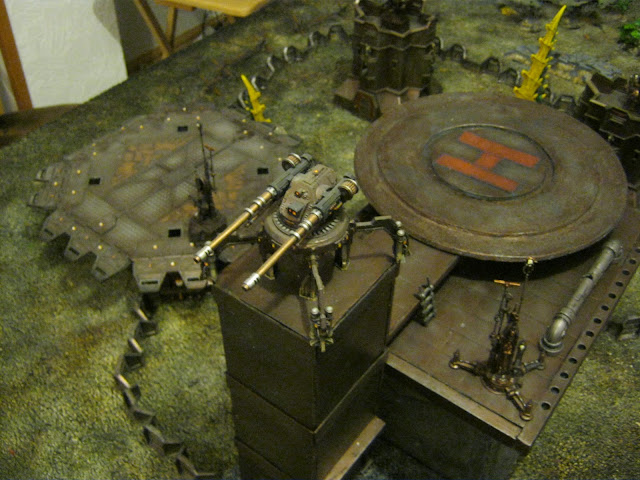 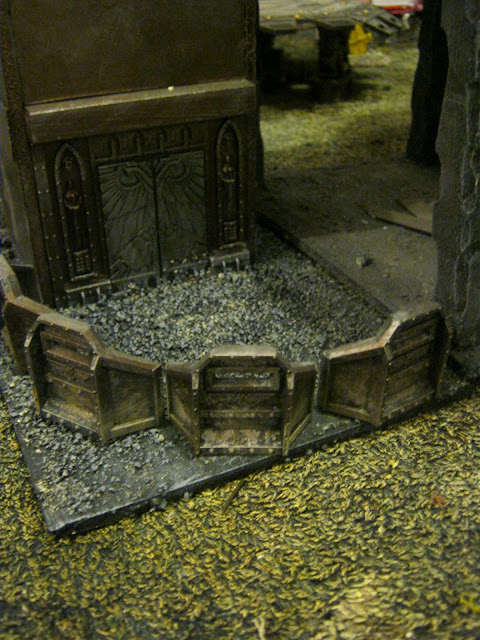 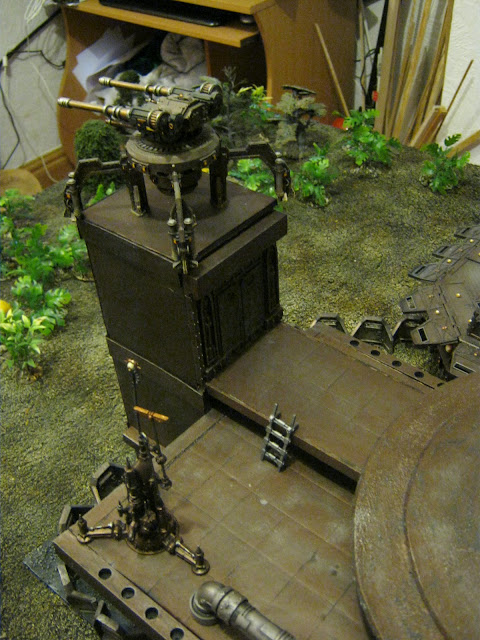