Orks & Chaos v Crimson Blades | Tim v Gill | Space Crusade | 44 | 099.997.M41
Elsewhere in Escavar, close to the Castle of Mourning, secret base of the Good People, stood a massive warehouse complex. It was here that Nob’Rod of the Shaggin’ Dogz and Archmage Übel met to discuss an alliance. Security forces from both factions filled the warehouse as they sat down to discuss terms.
Lord Übel had instigated the meeting. The Orks were a destestable race but until his power base was consolidated they would prove a useful distraction if aimed in the correct directions. For his part, Nob’Rod was more hesitant. The Ork perspective didn’t require the security of an alliance as long as there was killing to be had but he was open to hear what terms the Chaos Space Marines had on offer.
Before the details could in any way be finalised however, the outer doors of the warehouse were breached in three places simultaneously. At each entry point, a Crimson Blades infiltration squad took ground, eliminating all resistance.
News of the attack immediately went to the conference chamber and the negotiation broke. “We’ll finish this later,” whispered Übel. 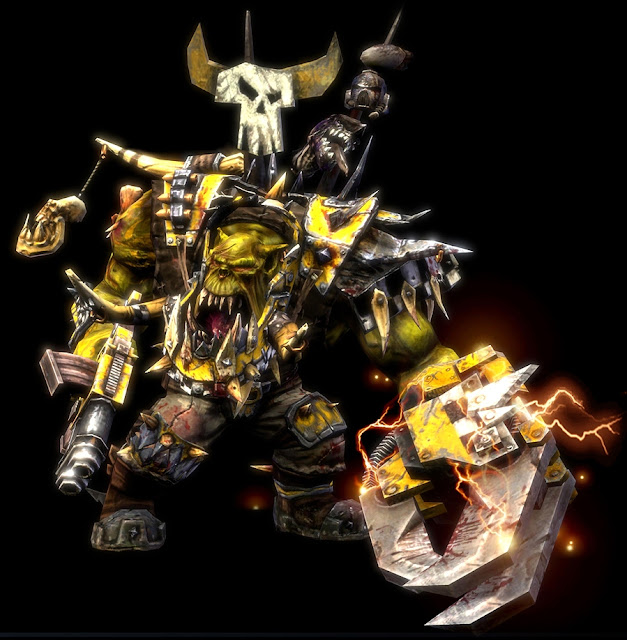 “We’ll see,” snarled Nod’Rod, strapping himself into his mega armour and charging out the door.
Each faction split off, forming a pincer and moving down through the building toward the approaching marines but nothing could prevent the infiltration squads cutting their through everything sent down to meet them.
Archmage Übel confronted one of the squads with his Thousand Son space marines trying to clear a path but each one was cut down and he was forced to withdraw, wounded, abandoning the alliance... for now.
Nob’Rod didn’t fare much better. Marines were eliminated by the waves of Orks and Gretchin he sent in but it was clear he was at risk from a closing fist. Like the Chaos Sorcerer he withdrew rather than risk a fight he could not hope to win, but the sign of weakness was noted by his boyz.
Perhaps this was a sign that the Shaggin’ Dogz required new leadership.
Posted by Jack Finn at 11:47