When Tim asked me to submit a tactical summary of our latest “Conflict Valorax” battle - and what a delight this campaign is to be involved in. I decided that as my tactical acumen has historically been shocking, and having had a little success writing narrative for my Chaos Marines Sorcerer, Erasmus Bachmann (which Tim kindly added to his battle reports) it would be fun to share with you the thoughts of my forces leader, Shas’O Tau’N Mal’Caor Run’Al


And so over to “The Hidden Spider”

Shas’o Mal’Caor surveyed the battlefield and shook his head sadly. The Gue La had fought courageously, and had even managed to badly damage his own Battlesuit. However, the fight had been a surprisingly easy victory, especially considering the losses suffered by his Brother-in-arms Shas’O Shi in a previous engagement with the Humans.

The Guardsmen had employed a rather unusual strategy, which may or not have been in response to the immediate loss of two of their Tanks to his Broadsides’ accurate and devastating fire. 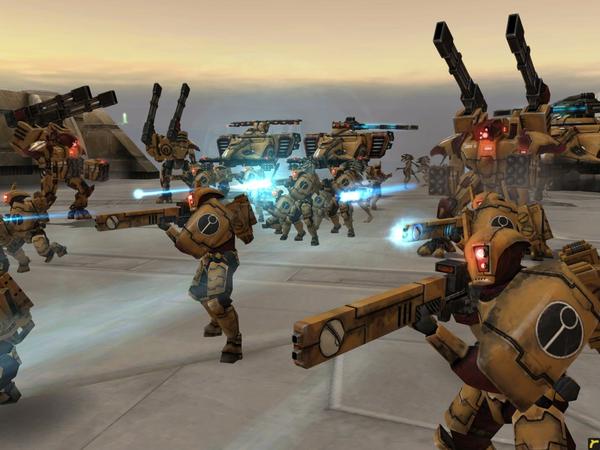 They would certainly have been hard to shift from cover, especially considering the amount of small arms fire those large units of Guardsmen could dish out, but for some reason they had been forced forwards by their leaders into the range of his gun-line. One squad had faltered and retreated after suffering particularly heavy losses and had then been targeted by their own side - Truly these were savages who would benefit from the “Greater Good” as did his people.
Mal’Coar had had no option but to subject the Gue La to concentrated and deadly fire and had deliberately targeted the command units and guardsmen who were closing on his lines. The combination of two Devilfish, two squads of Firewarriors with Pulse Carbines and Rifles, supported by a squad of Battlesuits and his own command squad (using experimental weapons) took a terrible toll on the poorly armoured humans.
Tau losses had been minimal, four Battlesuits, including his own, were heavily damaged or destroyed mainly by Orbital fire from an Imperial Navy Battleship which was being directed by the Master of Ordinance, who had annoyingly fought to the bitter end. One of the Devilfish transports had been destroyed after flying within range of a Melta weapon; the Firewarrior squads suffered no more than superficial wounds, thanks mainly to taking advantage of the large craters and debris formed during previous battles.

Mal’Coar reflected that the Gue La had been foolish to exclusively target his Broadsides, who had set up at each flank in the hope of creating a deadly crossfire, until most of their forces lay dead or dying - the ruined Battlesuits lay testament to that.

Tau support in the form of a squad of Piranha, had arrived late due to the humans’ air superiority, but once behind enemy lines the use of Seeker missiles directed by “Markerlight” hits from the Firewarriors had easily destroyed the third enemy Tank, and then the fourth and last “big gun” was terminated by the Piranhas’ own weapons.

With the tanks out of the fight the Broadsides’ had made very short work of the heavy weapons squad which had been targeting them, the first team being vaporised resulting in a total rout.

The Tau forces had discovered an unusually high ratio of flame weapons among the Human dead; this may be part of the new tactic and certainly a development to keep a watch out for in the future.

The Tau leader mused that had the Imperial Guard targeted his infantry with their Ordnance and close-assaulted his Broadsides, things may have turned out differently. As it was, the “Greater Good” had been preserved – for now.
Posted by Jack Finn at 11:00