To Cut Off The Head: Part One - A Dark Light in the Sky

Planetary Governor Ivan Chord felt his feet leave the ground as the explosion hit, tossing him up and back at sixty degrees.
Where he’d been standing, the floor cracked and flame licked through but he was still being hurled backwards. The backs of his legs struck something – one of his aides – and he tumbled, revolving: head going down; legs going up. Until a secondary explosion hit and he flew suddenly sideways, changing direction in mid blast. Except this time he caught a twirling glimpse of his secretary, screaming as she caught the brunt of the blast instead of him.
This must have been what it was like for the normal people, he thought, when I ordered the Immolation.
... the all-encompassing planetary bombardment that had ended the Manticore War against the Tyranids at a terrible terrible cost in lives.
He hit the wall, cracking the plaster and that thought was gone in a pinpoint of agony. Momentary weightlessness; and then he hit the buckled floor on his shoulders, barely avoiding a broken neck.

He lay there, sprawled across something some uneven bulk, gasping; winded. The internal lights were out. Smoke was everywhere. Burning wood; scorched metal; blistering flesh. And wind. He bent at the waist, twisting his body so he could get to hands and knees.
The wall was gone. Fully one third of the building was gone, ripped away in the detonation of whatever had struck. And then he saw what had saved him: his secretary’s body, broken and torn on the floor beneath him.
She used to chatter about her son; a toddler. She used to smile and laugh. But damn him, he couldn’t remember the name of that son now. His mind was a whirlwind of tactical responses and assessments of threat level. However he still didn’t even know what he was up against.
Until he looked out across the cityscape of Qualitat, Valorax’s capital city, and saw what was coming. 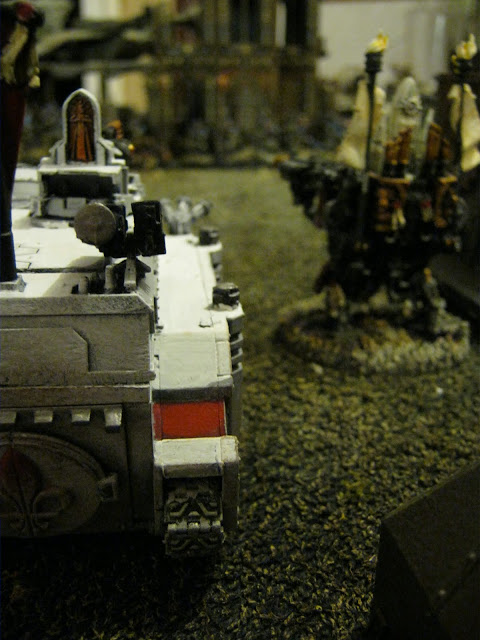 White armoured transports and tanks and in the shadows of the ruined and smoking buildings all around: white armoured figures, lithe but stalwart. Red cloaks; bolters and dark bobbed hair. The Adepta Sororitas. Sisters of Battle.
Ivan Chord cursed and got to his feet as the remains of his bodyguard kicked open the burning door and ran to give him aid.
There, don below, striding through the ruins on pistoned legs, supported in the lumbering but entirely potent Throne of Judgment, was Inquisitor Lord Karamazov.
They hadn’t even announced their secession from the Imperium – they’d done precious little to work toward it in the midst of re-escalating conflict with the invading xenos – but the Inquisition had known and here they were to deal with it.
“Well it had to happen sometime,” he murmured, smiling grimly.
“Sir we have to get you out of here!”
Chord focused on the officer. “What’s the evac route?”
“We have a Vendetta gunship on the landing pad at the rear of the building that didn’t get hit in the preliminary bombardment.”
“Then what are we waiting for?!?” 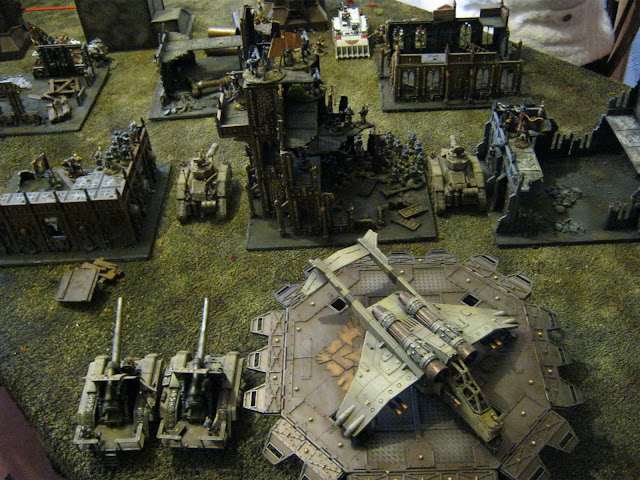 As Ivan Chord and his escorts ran for the faltering staircase, Valorax Guardsmen ran to take position in the ruins below and in flanking buildings. The bulk of their number had been wounded or killed in the Inquisition’s firestorm but there were enough at least to mount a delaying action.
Lasguns, grenade launchers, plasmaguns and meltaguns let rip against the approaching forces as two Leman Russ Battle Tanks rolled up to support them, taking out the lead transport of the Sisters of Battle. Arco Flagellants, boiling with holy rage, bounded down the street toward the line of guardsmen positioned to face them but, impervious as they were, they got whittle down to nothing before they could strike.
Ivan Chord and his bodyguard were down to the ground floor. The devastation was even worse there. This room had been a conference room for lower level officers. Now it was as if a broom had swept everything; furniture and people; into the corner in a grisly mass of broken flesh bone and metal. The sound of lasgun fire was deafening but they kept their heads down and kept running. All of these men here would die – there was absolutely no doubt about that – but the sacrifice had to be made, no matter how horrifying. Without him to lead them, the weakened planet would surely collapse before its myriad enemies. The war would be lost and all survivors would be purged.
But that didn’t mean Chord had to like it. 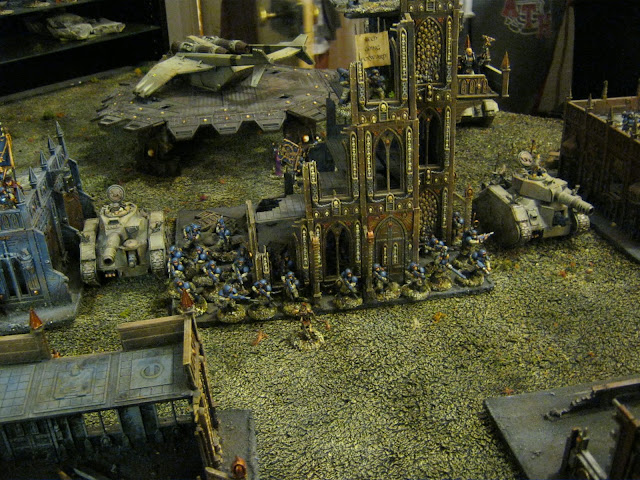 They ran out the back of the building, even as the Adepta Sororitas closed to bolter range at the front, unleashing torrents of explosive shells into the faltering guardsmen. They hadto get on board the Vendetta! Now!
They ran to the foot of the landing pad and Ivan Chord slammed his palm against the control panel to close the crenulations of the protective shield to protect the craft as they boarded. The machinery clicked and then whirred as it started to move.
Then no more than fifteen yards away, the air ruptured, whining as unnatural tears began to split it, and Ivan Chord’s throat clenched. There was a brief flicker, then a bright flash and out of the tiny warp explosion strode five grey knights, raising their arms and letting fly with Storm Bolter fire that ripped into Chord’s guardsmen, taking three of them down instantly. 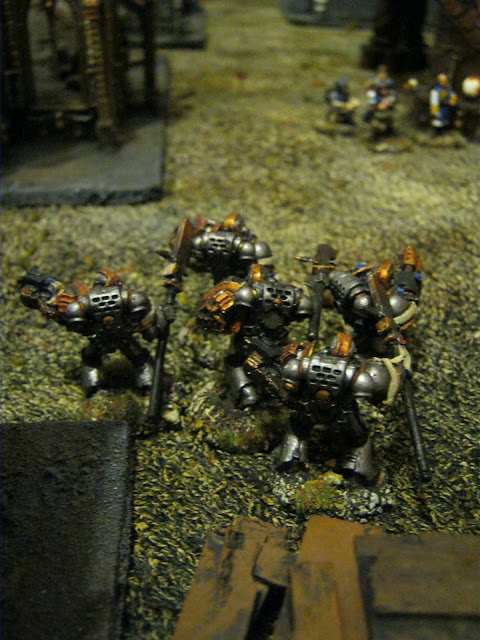 His mind flicked to the report he’d read of what they’d named the Valorax Schism, the battle in the heavens with a Grey Knight battle cruiser to secure more troops to bring home. He had known they would come one day, but the combined assault with the Ordo Hereticus he had not anticipated and he had not prepared for.
There was only seconds left now to make his escape: climb up the ladder; get into the transport craft; fly away and hope not to get shot down.
But then the shield guard of the landing pad snapped into place, revealing sky above his head and there was a sudden cooling of the air.
Ivan Chord looked to the man beside him. He was shouting; screaming as more Storm Bolter fire ripped him in half; but no sound reached Chord’s ears. The din of approaching battle was completely blanked out.
The Grey Knights strode towards them, raking left and right with their fire but the shots made no sound.
There was light everywhere suddenly; all around him; centered on the spot where he stood.
All around him, his bodyguard were lying dead or wounded. But the Grey Knights were no longer approaching. They were lowering their gun arms. They were only watching as the light grew brighter and then brighter still.
Ivan Chord’s brow furrowed. The light was growing in intensity. For a moment he didn’t know what it meant.
And then he understood, and his thoughts went again to the Immolation, his order to wipe out the Tyranid threat from space, even at the expense of hundreds of thousands of lives.
What had he said before he gave the order? What sound bite of trivial nonsense had he given to both immortalise and trivialise that horrific but necessary loss?
Oh yes.
“I ask you once again to give your lives so that others may survive; to die alongside the foul xenos filth that corrupts our world so that we can at last be free of it.”
He whispered those words now, appreciating the irony, as the ship-to-ship lance on the Inquisition’s gunship speared down and incinerated him in white fire.
The impact burst out across the watching Grey Knights but they did not move.
The Planetary Governor was dead.
The impact of this would be far reaching and devastating.
But the war was still only just beginning...
Posted by Jack Finn at 11:09