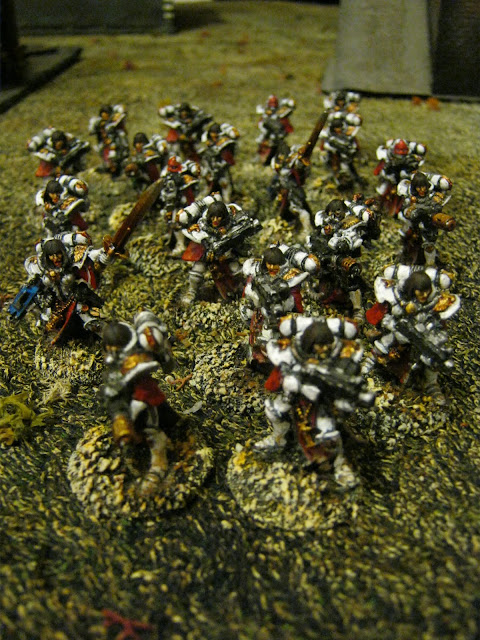 Sisters of Battle are great. They look marvelous and are rare enough to be a cool army to own. Their background is particularly fascinating. And they're good in the game. If you play them carefully.
Always remember: despite the power armour and bolters, THEY AREN'T SPACE MARINES!
But they aren't Imperial Guard either.
It's a case of recognising their strengths and weaknesses. As far as Battle Sisters shooting goes they are every bit as good as Marines. In defence, apart from being a point down in Toughness, they're just as good again.
It's in close combat where they're low Strength and Toughness brings them down.
Solution, keep them at range and play to their strengths. If you can keep your opponent away from them then you're effectively getting cut-price Marines.
But close combat will happen and it's there that Acts of Faith can come in handy.
For special weapons I'm inclined to go with flamers and stick them in a Repressor. I'll be writing another article about that in due course. Otherwise give them a Heavy Bolter and stand them back, blasting away and playing to the great strengths they have.
Posted by Jack Finn at 15:09