The Tau of War

Tau vs Valorax Guard | Peter v Tim | 40k | 55 | 109.997.M41
The Tau had struck a hammer blow in the heart of the Chalice against the loyalist forces of Valorac, but they hadn't reckoned on the massed infantry of the Valorax Guard. 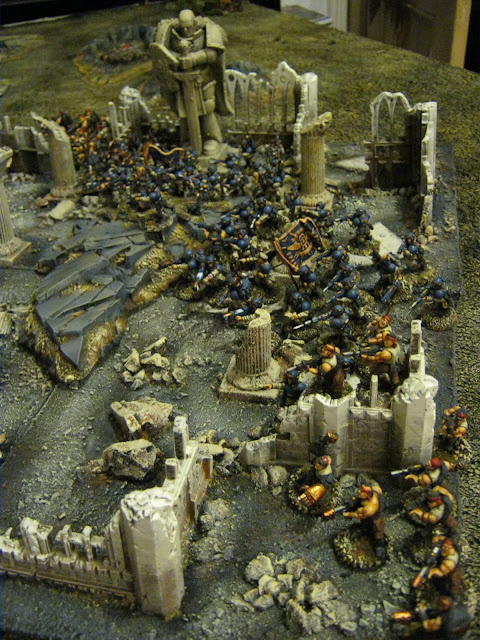 As the Tau war machine glided into occupied territory, vaporising resistance,  the call finally got through to Valorax High Command, still reeling from the death of the Planetary Governor. The threat assessment was made and orders came straight back down the pipe, mobilising reinforcements. Victor Tensk, High Marshall of the Tridents, took direct command, manoeuvring hundreds of infantrymen to get into position to defend their land.
Where before the men of the Guard had run angrily across open ground to meet their attackers, only to be gunned down, now they took up well-defended positions amongst the rocks and craters and in the ruins of a Temple of the Divine Emperor.
The Tau closed in, taking cover in craters themselves but the guardsmen moved forward unleashing devastating salvoes of lasfire. At their initial encounter, the energies of the officers had been wasted ordering their men to run as fast as they could toward the enemy.
Now they demanded only coordinated and focused volleys of fire.
And the Tau fell.
The anti-tank weaponry of the xenos was all but useless against such massed infantry and their numbers began to whittle down, despite the cover they maintained. Meanwhile, their own pulse rifle fire was insufficient to pull down enough of the Valorax Guard numbers.
Then the Tau reserves arrived: Crisis Suits dropping from the skies and Piranhas zooming in from the horizon. Immediately the battle swayed back in the Tau's favour as an entire infantry platoon was devastated by flame and pulse fire, the remnants fleeing.
The Guard commander called for his reinforcements, hoping to direct them to deal with this new threat, but only static answered the comm. The Tau were blocking his communication. No reinforcements were coming! 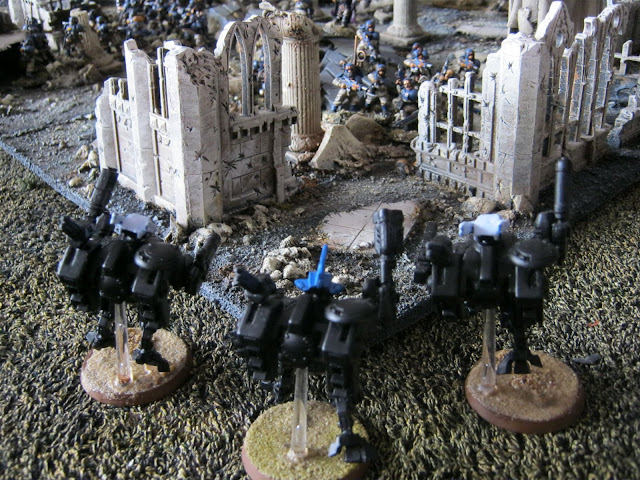 Then howling from the clouds came Mack Tempest and his squad of elite Stormtroopers on grav-chutes, carefully aiming their landing zone into the thick of the fighting. It was likely a suicide mission but the enemy priority targets needed eliminating.
They let fly with three meltagun blasts on the squadron of Piranhas but fate was against them. Even with their perfect positioning, minimal damage was accrued and the Piranhas immediately fired back, cutting them down.
Simultaneously, the Hammerhead at the other side of the battlefield burst into flames as a Vendetta gunship appeared, letting fly with three twin-linked Lascannons. The Tau signal jamming had evidently been more than inefficient.
But the battle was still going badly.
A vicious assault had broken out on one flank and no matter how many guardsmen ran to give aid, the Crisis Suit Commander smashed them aside.
The Guard Commander looked out across the swirling battlefield, signalling the general fallback.
The conflict was escalating. Reserves were being funnelled in from both sides. They were losing here - that was doubtless - but the war was only beginning.
The next exchange was going to be overwhelming in its bloodshed and brutality.
Posted by Jack Finn at 15:05