Claiming Back the Jungle - Part One: The Retaking of Station Xeta

Deep in the heart of Lapitar, the dense jungle region of Valorax, stood Station Xeta, the chillward entrance to a once thriving manufactorum complex in a time where defences for individual buildings were not a priority. Now it was just another point of contagion, a festering zone where the mass Tyranid brood nests pulsed, preparing their grisly children to take back the world they had almost conquered once before. 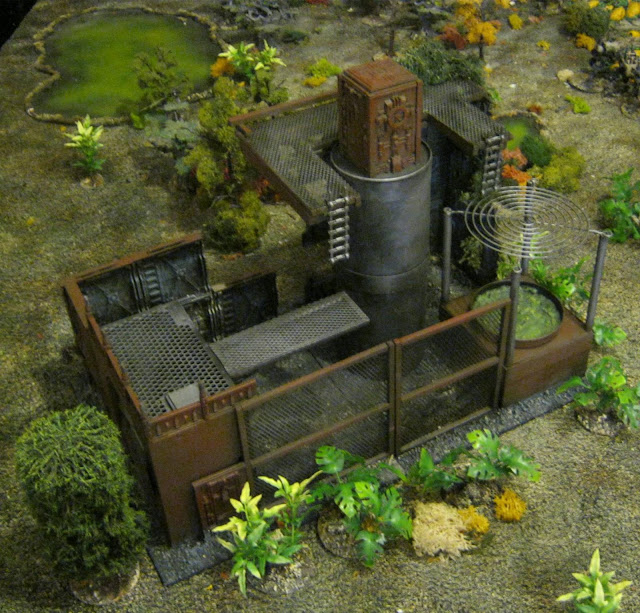 But this was Lapitar and the alien menace had not taken full calculation on the other inhabitants of that region. The Tyranids had not reckoned on the the determination of the Jungle Men of Lapitar to take back what was theirs!

The infantry squads moved in through the underbrush and took up firing positions, spying out the brood nests as priority targets and unleashed fire from their Heavy Bolters and Lasguns.

Immediately, the foliage erupted as huge stalking creatures burst forth, wielding lethal bioweapons, each of them hurling chewing fleshworms or globules of scalding acid at the encroaching humans. 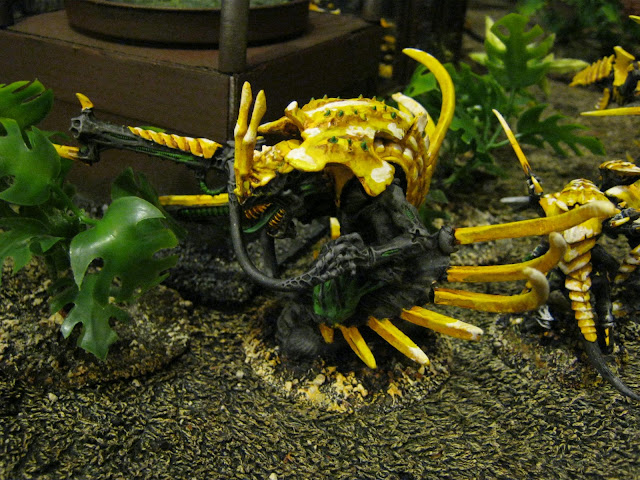 With a roar, a Hive Tyrant strode out of the manufactorum and led its forces toward the guardsmen, slicing the air with two gigantic pairs of scything talons. 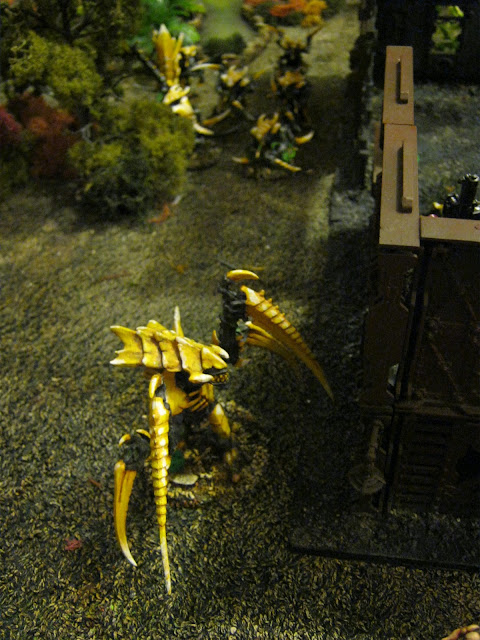 As Vendetta gunships swept down and tore apart one of the brood nests with their twin-linked Lascannons,. the eggs of the other burst open to release a massive brood of Hormagaunts, frighteningly close to the human line of fire.

Without concern, a third Vendetta dropped from the clouds, disgorging a squad of hardened veterans on rappel lines who unleashed the fire of hatred from not one but three flamers, wiping them out. Simultaneously, storm troopers fell on grav shutes into the upper layer of the manufactorum, hotting plasma and hotshot lasfire into the Carnifex lurking inside and bringing it down under a single salvo.

Then eggs attached to the underside of one of the ceilings cracked and a Ripper Swarm  slithered out, swarming up the walls and forcing the paratroopers to withdraw. 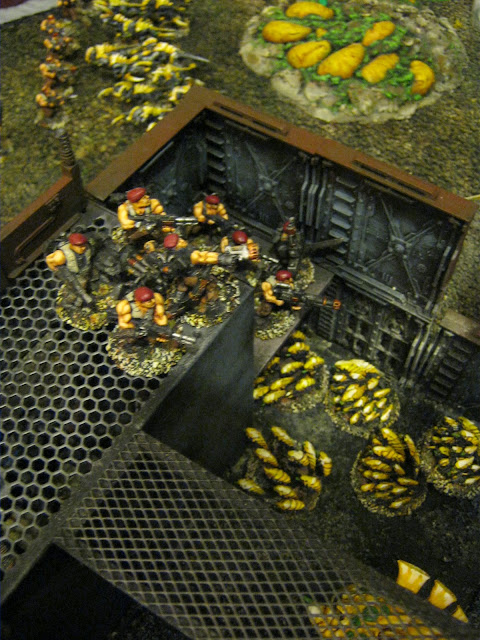 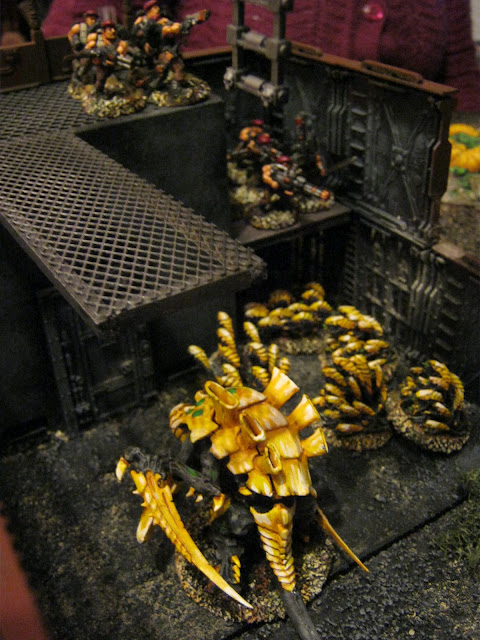 Station Xeta was still in the hands of the Tyranids but sniper rifles and heavy bolthers, plasma cannons and, most importantly, the twin-linked lascannons of the Vendettas, were systematically wiping out all opposition. But then the ground started to shake and split asunder and right in the centre of the Guard's defencive positions, a gargantuan Trygon tore up and ripped one of the infantry squads to shreds. 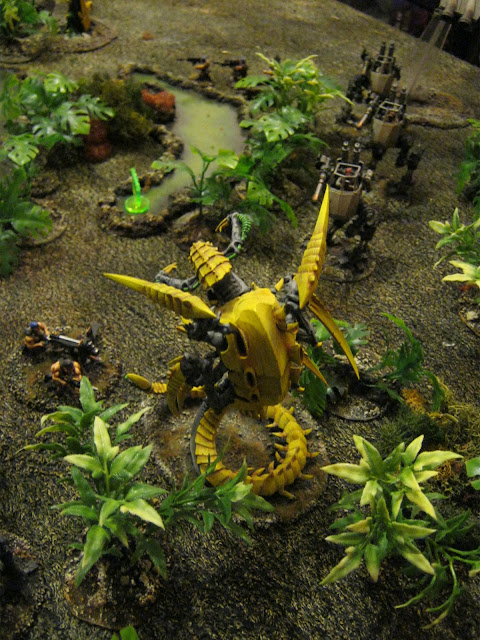 The autocannons of the scout sentinels and the Swirling Vendettas almost brought it down immediately, but it tore into the Guard lines, obscuring itself from return fire. Only when it had destroyed the sentinels and a dozen more men were the Vendettas able to bring it down. 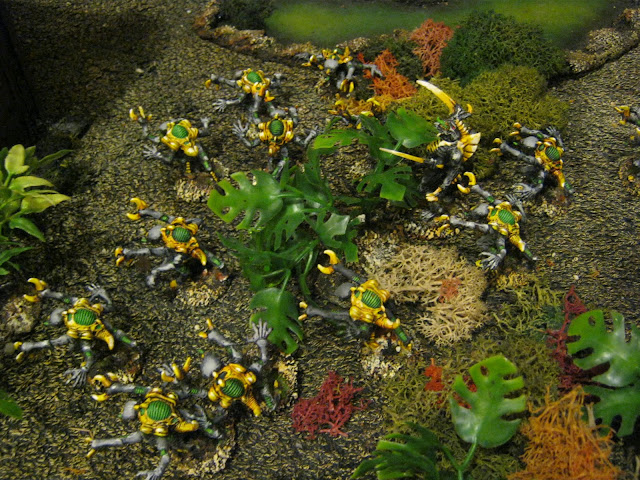 Genestealers swarmed from the jungle, too far away to achieve much good as the Guard Target Assassin moved into position, sniping a Zoenthrope and charging in to dispatch the remnants of a brood of Tyranid Warriors. Meanwhile, as the Hive Tyrant ripped into the command squad sent to intercept it, the Storm Troopers counter attacked, refusing to break so close to their regimental standard, and in time the brute was brought down and disintegrated.

As this was going on, one of the Venettas came in high overhead and dropped a squad of infantrymen into Station Xeta on rappel lines. 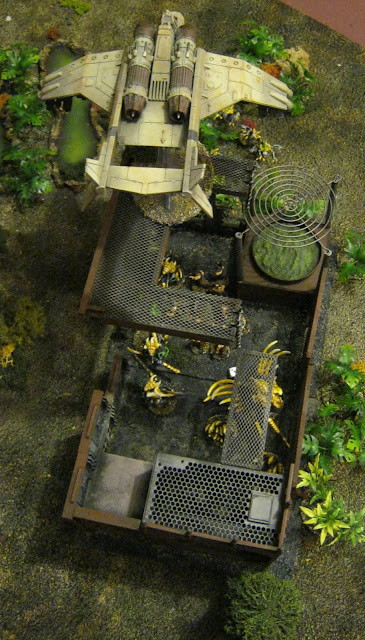 The Tyranid forces were coming apart, their synapse chain breaking open at key points. Without the bigger creatures to support them, the ground troops were scattering.

With more and more guardsmen funnelling into the area, their infestation was disinfected. 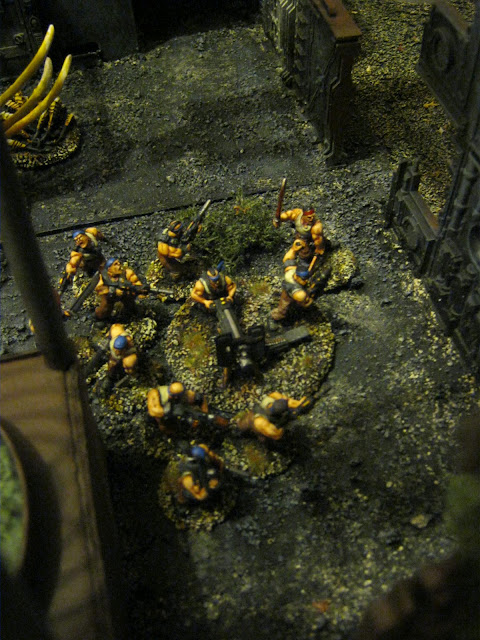 With extreme prejudice.
Posted by Jack Finn at 18:36