The Doom Spheres: Part One - Two Kinds of Impending Doom


In deep space, at the outer reaches of the Valorax system, Battlegroup Myrmidon glided silently through the void, vast craft containing hundreds and hundreds of menials and technicians, many of whom had never set foot on any planet. 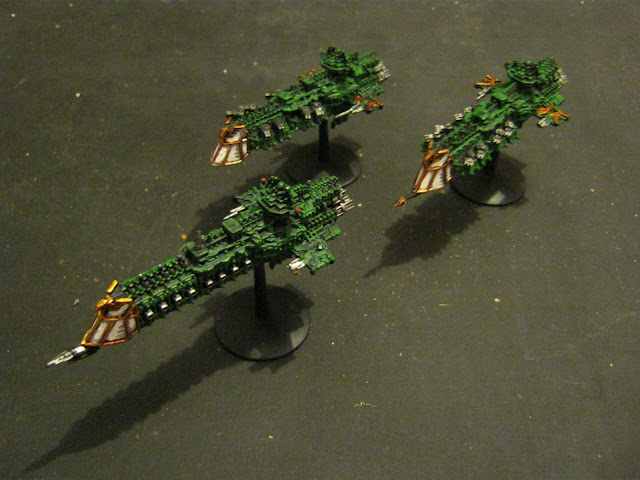 The Battlegroup was tasked with reconnaissance duty, skirting the outer reaches of the system close to Valorax X, one of two freezing mining worlds that had once been pivotal in the systems manufacturing capability.

Valorax Prime was already under attack from numerous extraterrestrial antagonists. It was this small battlefleet’s task to remain vigilant for further incursions; new threats: to engage and destroy if possible and signal for greater help if necessary. The Battlefleet was composed of three capital ships: a Dominator as the flagships, weapons batteries running down its flanks, and two Gothic class cruisers, heavily armed with lance turrets. 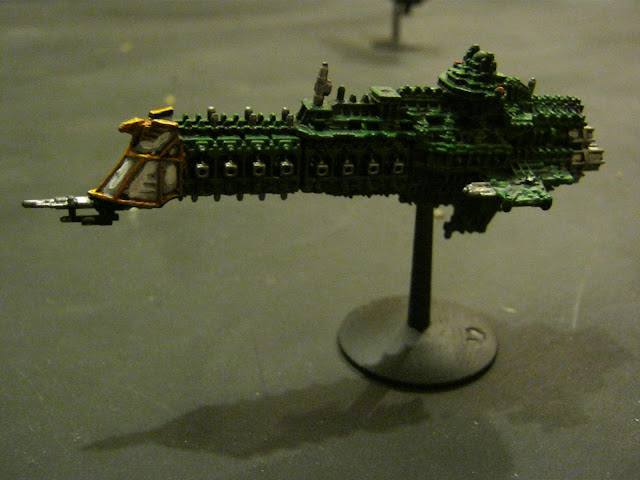 They had seen no recent fleet action but long range scanners were picking up ship movement at the edge of the system, sunside of the Vandberg Channels from the direction of approach a fleet would take if coming from the Hellslip Passage.

There were no records of planned approaches and no astropathic communication indicating friendly forces. This was reason enough to charge batteries and load weapons systems in readiness.

And then they came into direct scanning range and what had been indiscernible blips on-screen solidified into palpable and imminent danger.

It was Orks! A Kill Kroozer and a veritable swarm of attack ships! If the other blips closing on scanner were to be believed, these were the point ships of what was likely to be a massive invasion force. The Orks on Valorax already, laying siege to Mechlok Base with devastating brutality were only the beginning. This swarm of assault ships was the herald of a far larger force – a force that could devastate the planet and bring all opposition down before it. 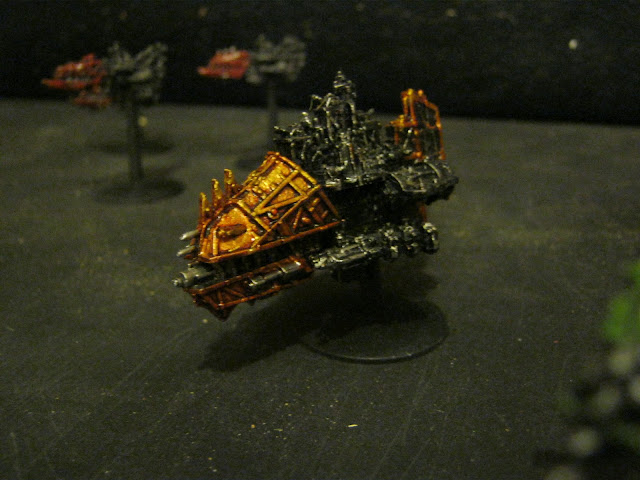 The Ork ships were still a long way off and this area of space was clear of celestial phenomena. This was the perfect opportunity to inflict as much damage as possible as quickly as possible. Admiral Yorvik put the order through to the other ships via subspace transmission to turn about and face the system intruders. Then he calmly ordered a message to be sent to his astropath that a message be sent immediately to the closest fleet relay base that more support was required from Battlefleet Carrion.

His first mate gave a nod. The Dominator’s nova cannon was primed and ready. The Ork ships had powerful but short ranged weaponry. At this range, the entire advantage lay in the ships of Battlegroup Myrmidon. Yorvik gave the command and the first nova cannon shot was unleashed, an immensely powerful missile capable of crippling a ship with a single direct hit.

The first shot fell short. The second exploded with nuclear force beyond its target. Admiral Yorvik quietly ordered his men to adjust their targeting and fire again, each ranging shot bringing their accuracy closer to target. 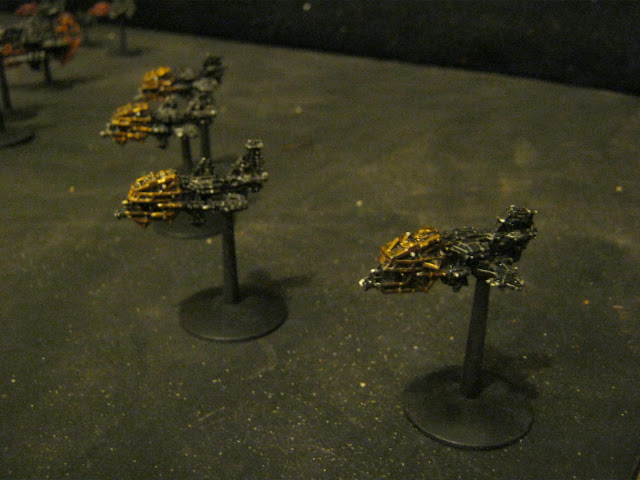 The Orks were blasting all ahead full but they were still so far away, far too far for them to be able to fire – when the first nova cannon shell connected with the Kill Kroozer, ripping a massive gouge in its flank as gasses, air and hundreds of screaming Orks were sucked out into space.

The next nova cannon blast struck it in the prow, crippling the engine room and disarming its starboard weapons batteries. Still undeterred, the escorts and the listing but determined Kill Kroozer, kept coming, closing the gap.

Admiral Yorvik put the command through to the Gothic class capital ships to prepare a precisely calculated turn to expose the enemy to their broadside lances. 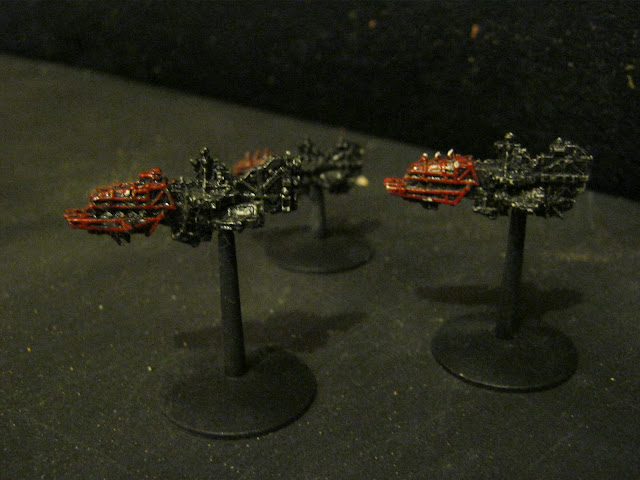 Then from the darkness from which the Ork fleet had come, a huge black sphere glided into sensor range. It was vast and unlike anything Admiral Yorvik had seen before and in those first instants he had two thoughts: the first that this was some kind of super weapon built by the Orks to rain greater destruction on the Imperium, despite it apparent elegance; the second that perhaps the Orks weren’t gunning their engines in attack. Perhaps instead they were rocketing through space away from this thing. Perhaps they were fleeing from it. 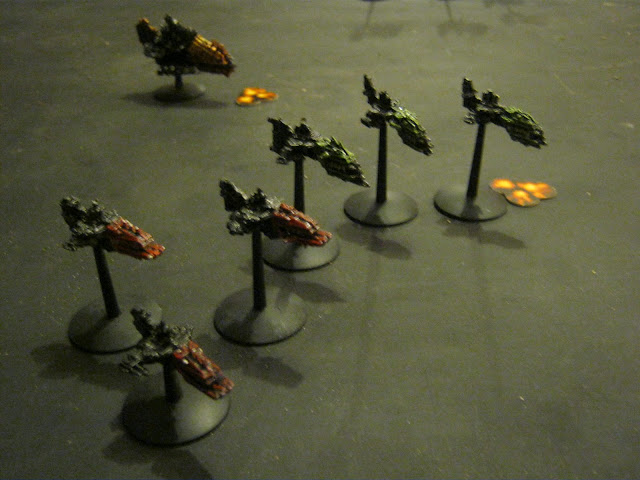 And then the Orks reach the outer range of their weapons and Yorvik had no more time for contemplation.

They let fly with their gunz at his ships as the Gothic returned fire with their lances. The Dominator lost the ability to use the nova cannon as the Ork ships dropped too close and it started to turn to level instead its weapon batteries.

Suddenly the void was filled with light and fire as the Ork and Imperial ships let fly with every weapon at their disposal.

And still beyond them, the dark sphere continued its slow approach. 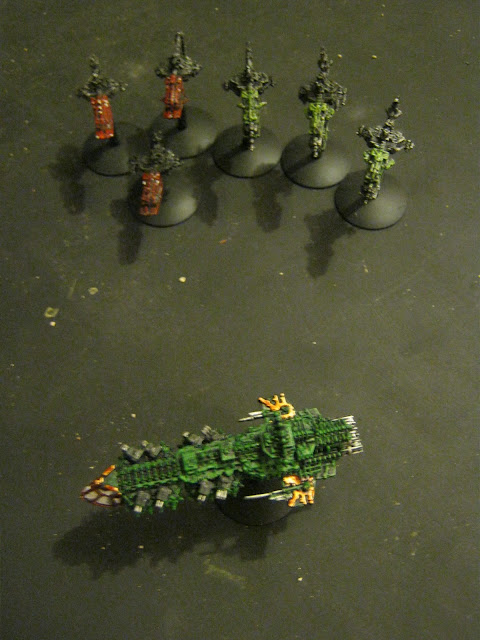 The lances of the Gothics took out a slew of Ork attack ships, the shields of the escort craft insufficient to protect them. The Imperial ships took damage but the Orks had lost all initiative by taking losses early on. There were too many unharmed and powerful Imperial ships compared to their already beleaguered fleet. 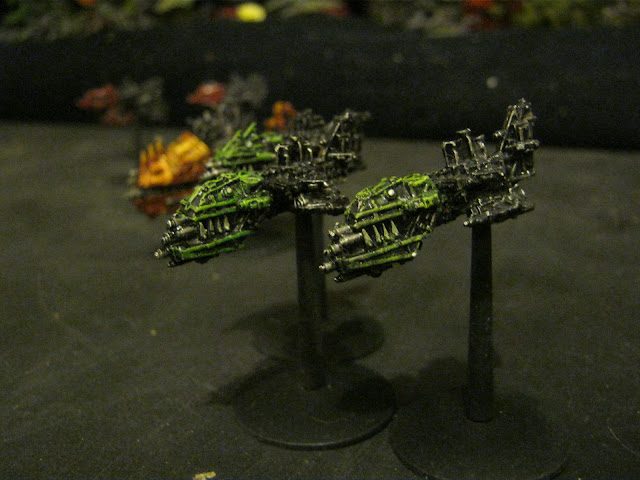 They continued doing damage but it was too little and suddenly the Ork warlord gave the order for full withdrawal. Making rapid turns and dropping all external power, the Ork ships went dark, slipping away into the void, leaving only smoke trails, debris and floating squirming corpses. 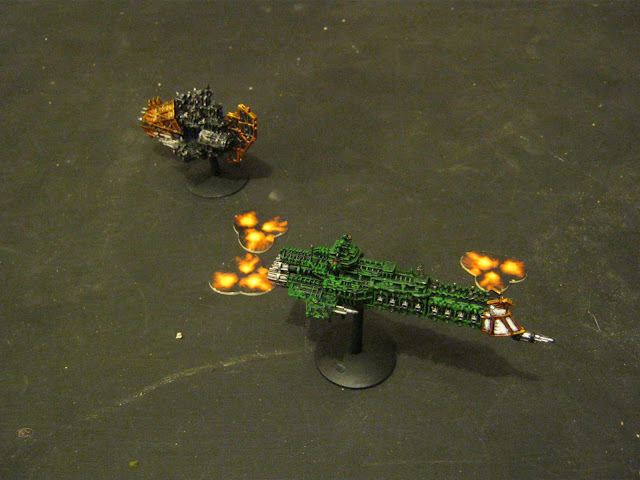 But still the black sphere came.

Bringing his ship about, Admiral Yorvik put out a hail that remained unanswered. The black sphere kept coming but it remained transmission-silent.

Yorvik was a calm man but he was also a cautious one. He tried one final hail then ordered the nova cannon be readied once more.

It was a big and ponderous target. Accuracy was not a problem. The nova cannon missile streaked through the darkness and made a direct hit in the centre of the sphere – exploding harmlessly against its shields.

The missile should have done immense damage. Instead it did nothing.

Admiral Yorvik and his command staff stood gaping, motionless as the dark sphere moved ever closer.

Then its weapons activated and in less than a split second his ship was torn apart and scattered to the void. 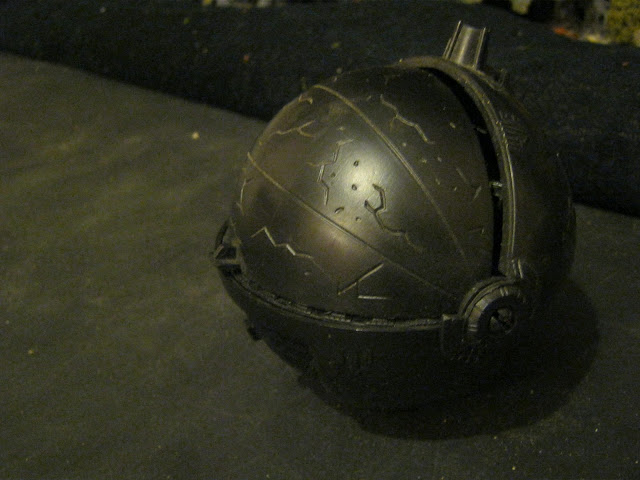 The captains of the Gothic cruisers panicked. Weapons of that power were unheard of. There was no ship they had encountered that withstand and unleash combat potential like that. And now the Dominator was gone, along with their commander.

They came about as the weapons of the Sphere turned their way, raking the flank of the ship closest to it as it struggled to break off in its attack run.

Massive explosions tore out sections of the cruiser’s hull. There was nothing else for it. Their only option was to enact a full disengagement as the Orks had done.

Both remaining ships cut power and drifted, desperately hoping to break off the engagement.

The powerful object drifted on as though it had not even cared about their presence.

It drifted on in its path in-system. It’s path toward Valorax Prime.

The Doom Sphere had come.