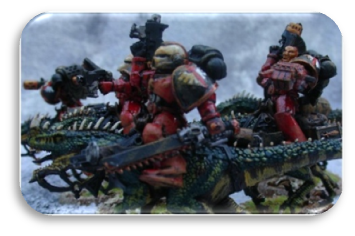 Background
Raptor Riders are members of the Crimson Blade’s Deinosus Battle Company – a company of loyalist marines utilising dinosaurs in the attack.
The Raptor Riders of the Crimson Blades are highly experienced scouts and close combat specialists but their principle role is that of a fast response unit.
Raptor Riders are principally held behind Marine lines as Captain Wulf assesses the enemy strength and points of attack. With the strong points established, the Raptor Riders dart forward to meet the enemy where they are most needed.
Equipped both for hand to hand wetwork and anti-tank precision melta-strikes, the Riders are fully prepared to turn the tide of battle at the critical point. 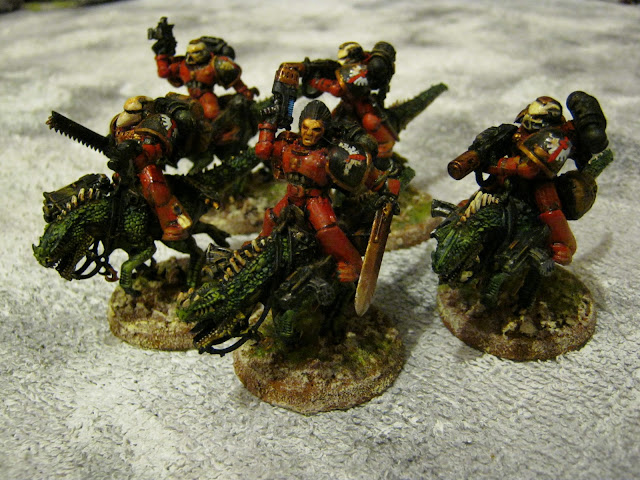 Making the Models
The models were made from Dark Elf cold ones with Tactical Space Marine bodies. All that was required was to bend the legs out a little to get them to fit on – no tricky sculpting beyond that. A knife slit in the crotch (sounds painful) helped to bend them out. I based them on round Terminator bases as cavalry looks a lot nicer that way.
Game Rules
The Deinosus Battle Company is based around the rules for Chaos Space Marines. This is a good technique for creating a new army. The models can be as whacky as you like as long as they are based on points and stats of existing models.
Raptor Riders count as Chaos Space Marine Bikers. 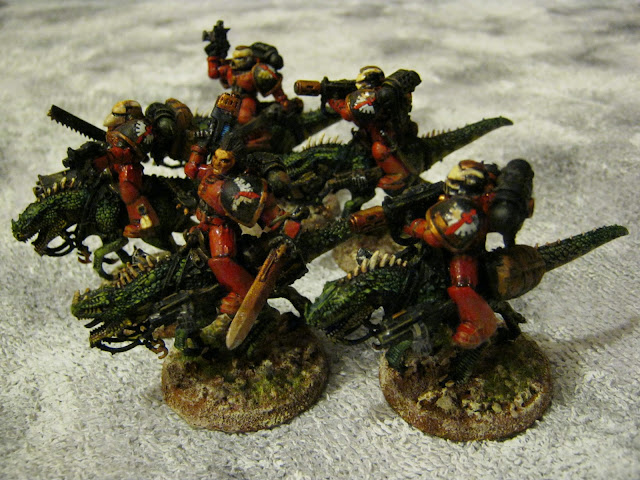 Tactics
The Raptors are equipped with two meltaguns, both for taking out vehicles and knocking out heavy infantry. Having two meltaguns gives an almost guaranteed destroyed result as long as targets fall within range. The power sword and plasma pistol of the veteran sergeant are also very handy to take out armoured opponents in close combat.
It’s always tempting with “bikers” to send them rushing forward. I DON’T do that with these guys. I hold them back behind my lines and send them in to where they are needed after the bolts start flying. That way the enemy doesn’t prioritise this expensive but good unit. Also the enemy vehicles are given time to move into melta range while my guys are still alive.
By holding them back and applying them carefully, this unit can be very very successful.
Posted by Jack Finn at 18:03